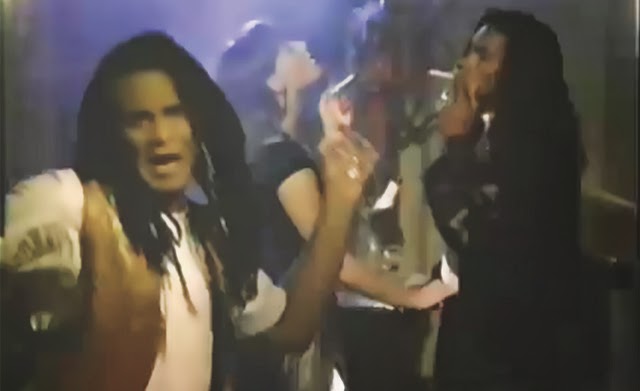 Pretty cool essay biography of Robert Pilatus of Milli Vanilli infamy told in the style of autobiography if Pilatus was a robot. Using clips of the duo and a robotic voice for narration the film is an examination of art, performance pieces and created phenomena. Attached to this a discussion of the Autotune program that was designed to help determine seismic activity but can also be used to manipulate the human voice so that non-singers can sound like pop superstars

Going into the film I thought it was going to be an amusing goof of a film. Instead I found it to be a film that worms its way into your head and makes you rethink your notions about fame and pop culture. When it started I thought “gee this is clever” and the as it went on I realized that I was looking at the various ideas it was throwing up differently. Yes I know that the pop music industry manufactures man of its stars taking good looking front men and tweaking/replacing their voices but the way we see it here you come to realize how cold and calculating it all is. It made me feel that what we get from the machine isn’t caring lovely music but a bar of soap or a can of soup. It also made me feel sad about – and the trajectory of his life.

This is a super film and one of the hidden gems of the Art of the Real series. (Actually its one of those fims that makes me sad that more people won’t watch shorts.

Screens April 24 with Just Like Us and A New Product for details go to the website
Posted by Steve Kopian at April 08, 2014