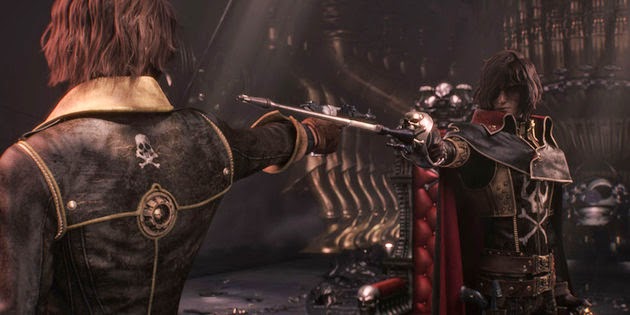 Leiji Matsumoto's classic character comes to the big screen in an epic tale of crashing space ships. This is as visually spectacular a film as I've ever run across. I only wish the film could have kept a better hold on the characters so they didn't get lost in all the explosions.

The plot of the film has a commander in the Gaia Coalition send his brother to infiltrate the crew of the dreaded pirate. Harlock is on a mission to return the earth to a point where it is still inhabited by humans- something the Coalition wants stopped.

If you want to know why the synopsis is so skimpy its because the visuals overwhelm every thing. No they don't over whelm everything, they stomp it into non-existence after beating it into submission. Its wickedly cool and I can't wait to see this on the big screen, especially if I can do so in the promised 3D. The problem though is that they are the film with the result the characters and story kind of get pushed aside. Visually you will be awe struck and gob smacked and everything else. If there is a flaw in the visuals its that the largely photo realistic motion capture images have character faces that look more like very good video game characters instead of real people. Yes I know this is an animated film, but if you're going phot realistic to that degree then you should at least go all the way.

Should you see this film?