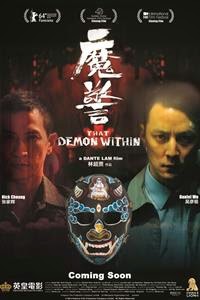 It’s rare for a cop film to make its hero more bat shit crazy than it’s villain, but in a weird way Daniel Wu’s hero in That Demon Within is just that. A loner with severe personality problems he’s a cop who’s been bounced around into and out of almost every precinct in the city because no one wants to deal with him. He’s a dogged narrow minded cop with anger issues, but we find out there is a hell of a lot more going on or going wrong in that head of his. He is ultimately more scary than the bad guys he’s fighting.

The  film has a gang of demon masked bad guys pulling off a series of robberies. The robberies leave good number of people dead. After one particularly bloody caper one of the robbers, Hon played by Nick Cheung, staggers into a hospital a bloody mess. Needing a transfusion, Wu’s Dave who just happens to be there offers to provide one, unaware of the carnage Hon, The Demon King, just caused. When his fellow officers arrive with wounded officers Dave is berated for giving that blood that is keeping Hon alive. Dave skulks off, but when the Hon escapes from the hospital Dave feels it’s his duty to bring him down. 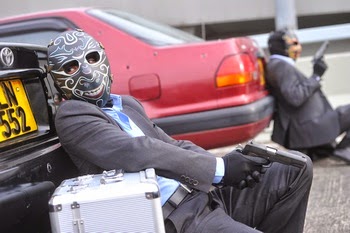 One of the bleakest darkest cop films to cop out of China in a long time That Demon Within feels like a throwback to the dark Hong Kong films of the 80’s and 90’s, but darker. First we have the dark nature of Dave, and if his violent streak wasn’t bad enough he hallucinates visions of people burning and nasty events. There is an almost constant reference to death and funerals. Sometimes is in the forefront (the frequent killings)and sometime it’s in the background (funerals and graveyards), sometimes it’s just the demon masks signaling other worlds and forces, sometimes it’s in the dialog but however it appears death is always on screen. This isn’t a film so much as a wake or a trip to the underworld ala the Buddhist ideas of the demon realms. This isn’t a cop thriller this is a horror film.

Speaking of death in the forefront, the action scenes are disturbing. People die horribly and graphically. Not only are people shot, they are shot multiple times. One of the demon robbers makes it a point of not only shotgunning a police officer but blowing him apart with shells when he’s on the ground. People burn live, both in Dave’s imagination and in reality. No one just dies, they die painfully. The violence is so ugly at times, I was completely taken by surprise that Hon’s escape from the hospital wasn’t a blood bath. In one piece on the film I read the writer said he felt that the film wasn’t going to end until pretty much everyone in the city was wounded or dead. While I never shared that sentiment, I completely understand where it’s coming from this is a kind of apocalypse. 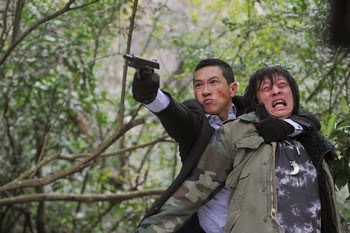 By the time the film was half over I wanted to take a bath in something caustic to clean the slime away. This portrait of a policeman as hidden psycho is deeply troubling. This is a film that I can admire but I don’t know if I can truly like it. I mean it’s so damn dark. That should in no way imply that this is a bad film, only that it’s not a film that’s easy to warm to. This is for most part a solid thriller.

My only real complaint with the film comes from something that has been irking the hell out of me for a year or so now in many Chinese films which is an over reliance of computer generated mayhem. While I completely understand that using computers allow the filmmakers to shoot faster and insert bigger and badder effects, the effects never full blend. For example in That Demon Within the many fire effects are largely CGI which gives it all an unreal feel. This would be fine during the hallucination sequences, but when say a car blows up during a shootout and a cop is engulfed in flames it looks wrong. 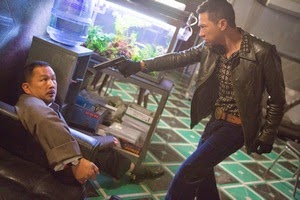 I would love to write and say more about the film but what I’ve taken away from the film is the feelings. What I remember is how uneasy and unhappy the film made me feel . Even my impressions of the kickass action sequences are tied to the bleak emotional landscape of the film. Its hard to carry on a long discussion of any ideas in the film when all I have to talk about is what I felt.

For details and theaters go to the China Lion website here. 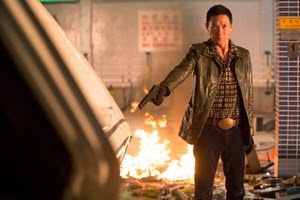