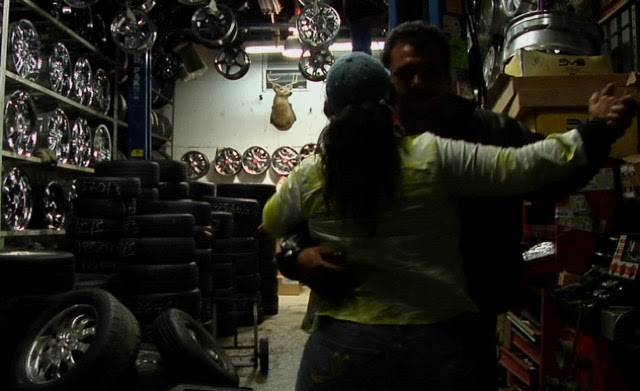 I believe this premiered at the New York Film Festival back in 2010. It now returns to Lincoln Center to be part of this years Art of the Real series.

Wonderful look at the area around Citifield in Willets Point on the eve of its redevelopment as a paradise of parks, malls and entertainment venues. When the film was made the area was full of auto body shops, junk yards and auto parts places, now all of the business are either gone or on their way out. To make the future this past had to go.

Seeing this film is like being allowed to wander in and out and around the various establishments that once filled the area. Filled with great people and characters this is the sort of film you have to watch a couple of times simply to see all of the the little things going on the background- what did that sign say, whats going on back there.

This very melancholy film  is a very rare thing in that it managed to capture a grand moment of change. To be certain other films have caught bigger moments, battles, political events, assassinations,but some how the enormity of those events pale when compared to the events in this film. Here the lives of every person seen is being altered, every person  nothing is going to stay the same for anyone. What's worse we don't know how its all going to end. When the film was made change was just coming, but as I write this some 4 years since the film was released that change is still occurring, its still devouring lives. Things are changing and not as anyone expected.

Email ThisBlogThis!Share to TwitterShare to FacebookShare to Pinterest
Labels: american, art of the real, documentary, nyff