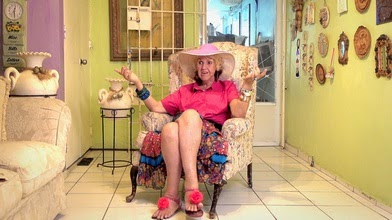 This film has flummoxed me. I honestly don’t know what to say about the film. I’ve written up four different reviews for the film and each one was so weak that I tried to write another… and another… and so on. After the press screening one of the PR people asked me what I thought and I kind of stammered and rambled on about my thoughts of the film, feeling stupid and condescending when I was done and wanting to do better when I wrote it up…

After a great deal of thought and attempts to write the film up, the best thing I can do is say go see Mala Mala. Anything I can say beyond that isn’t something I can do justice to.

The film is a look at the transgendered community in Puerto Rico. Centering on several very articulate women the film explains the problems they face every day. Because of prejudice and a system that doesn’t protect them many can’t work and are forced to turn to prostitution in order to survive. Some go into entertainment. Some drift. Over the course of the film we watch as the girls go through life and fight for equal protection under the law.

It will move you, not just emotionally but intellectually. As I said to the woman after the film, this is this film that I can show to people who have any issue with transgendered and homosexual community since it very clearly explains things on a human, non-abstract level  that they are people just like everyone else.

Actually the film’s strength and power is that the need for acceptance goes beyond the transgendered community to any marginalized group. We are all people. Its this transcending of the subject that makes this not only one of the best films at Tribeca but also one of the most important.