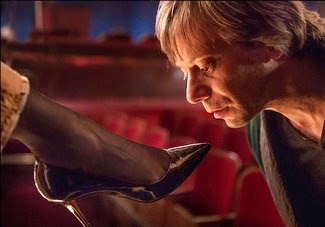 One of my favorite films of Tribeca has Roman Polanski back at the top of his game by adapting David Ives Broadway hit for the big screen.

Matthieu Almaric stars as playwright who is directing his own adaption of the novel for the stage. He is ready to hang up the auditions for the lead role, every one coming in being completely wrong. Heading out to meet his fiance for dinner he is topped Vanda,played by Polanski's wife Emmanuelle Seigmer, who has dragged herself and her bags into the theater for her audition.  What follows is a sparring match that is not what the writer ever expected.

A damn near perfect  piece of theater for the big screen, you would never know this films theatrical origins until maybe the last couple of minutes. Until then you have one of the great adaptions that I've run across. Especially when you realize that the play isn't really opened up.

I was floored by the film. To me it's a great film with two great performances. Almaric is one of the great actors working today so I wasn't shocked when he knocked it out of the park, Seigmer, who I never really recognized is equally amazing. I say this because I went into the film expecting this was, as with several earlier Polanski films, a case where the director's significant other got the role because of where she slept and thus wrecked the film, except that this is perfect casting. (and a little eerie since Almaric looks a tad too much like Polanski for comfort).

The verbal sparing and the dance down the hall toward dark sexual areas isn't gratuitous, but genuinely comes from the material. This is a film that is very much about the relationships between men and women and how that dynamic affects desire. Its heady stuff  that isn't really just about sex. It also raises the playing field  for any film that wants to try and mine the S&M  genre here after. I suspect that 50 Shades of Typing  and other similar films are not going be able to match the films intellectually and instead are going to have to use tits and ass instead of the more powerful words and implication.

I loved this film pretty much from start to finish, with only the final couple of minutes coming across as something too theatrical to work off the stage.

An amazing film. One of the best of Tribeca.