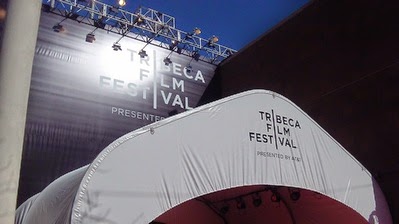 The quietest day so far for me. Just movies and a long over due sit down with Mondo for meatballs. Its so good to reconnect on a human level. I miss that.

Actually it was so low key I made it home at the same time I usually get home from the day job.

Today's slate was as follows:

SLAYING THE BADGER is the story of Greg LeMond's battle to win the Tour de France in 1985 and 1986. This is a gripping story that plays like the tensest thriller. Its amazing how the film keeps you on the edge of your seat even if you know how it all ends. If you can see this on the big screen (it plays tomorrow and Saturday) do so because the race stuff is great. If you miss it it's an ESPN film and will surface there no doubt when the Tour de France happens in July. One of my favorites of the festival.

NOW:IN THE WINGS ON THE WORLD STAGE this about the Kevin Spacey Richard III that played around the world a year or so ago. Its also the film that I covered the red carpet for last night. The film disappointed me greatly. While its clear that enough footage was shot to really explore the play and the production, what we get is a 90 minute puff piece or over long DVD extra that has too much of the gee whiz factor and not enough meat. It's not bad, but it's nothing special even if it looks and sounds great.

MISS MEADOWS is Katie Holmes as the prim and proper title character who is also a vigilante. The source of a long talk between Mondo and myself at the lunch that followed it I liked its black comedy off kilter tone and Mondo hated it calling it one of the worst films he's seen. Over lunch I realized that his points were all on target but at the same time I kind of liked it even if it wobbles toward the  end.

After the movie a much needed and long over due lunch happened between Mondo and myself before I headed back to the theater for one of the shorts collection called TOTALLY TWISTED. Its a mix bag having some of the best films in the festival of any length and one of the worst. A quick break down of the films is as follows:

Thirty Year Old Bris- A 30 year old man agrees to have a bris to make his girlfriend happy. Its a single joke about castration stretched out to 20 minutes. It has some laughs but isn't anything special.
Trust Me I'm a Lifeguard- Airplane like story of two lifeguards and the women in their lives. Its amusing if juvenile and has some laughs, but like the first film nothing special.
Peepers-One of the worst films of the year about a couple who think they are being watched by the peepers who hide in the darkness and judge them. Stupid doesn't begin to describe it.
Ramora-One of the best films of the festival has a man going to see his brother to get his blessing about his marrying his ex. What the brother discovers is the film and you have to just see it for yourself.
The Body- Great great horror film about a serial killer and a body he is dragging around on Halloween night when no one suspects. One of the best films of the festival. (I'm going to do a longer write up for this film)
One Please- I can't reveal what it is but think EC Comics grossness. A wonderfully ghoulish trifle.
Sequence- Almost great film has a man waking up one morning to find the entire world hating him because of something horrific he did in their dreams. Its brilliant until the denouncement when it falls flat. Its not fatal but it makes it just good over all.

That was it for today.  After that I headed home ahead of the rain and with hopefully enough time to catch up on my writing.
Posted by Steve Kopian at April 23, 2014