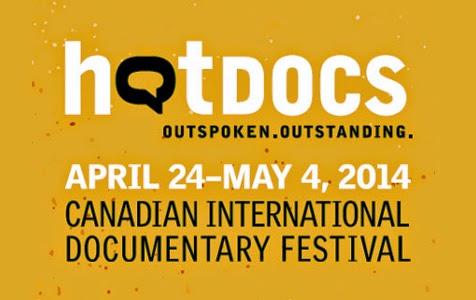 DIVIDE IN CONCORD
Good but nothing special look at Jean Hill a woman who is trying to ban the sale of bottled water in Concord Massachusetts because of what the bottles do to the environment. Her objection is the amount of waste that results. The film frames its as grand debate of rights which maybe pushing things a bit. Not bad but not great. My question is why is this an hour and a half?
The film screens:
Sat, Apr 26 - 9:30PM - Scotiabank 4
Mon, Apr 28 - 1:30PM - Lightbox 2
Sat, May 3 - 11:00AM - Bader

LOVE ME
Jonathon Narducci's look at the mail-order bride business, focusing on the people searching for love in far off places. While similar in many ways to other exposes on the subject (why are Russian and Ukrainian women always the focus?) the film scores over many other in being up to date and having some wonderful characters inside it. I expected to feel as though I had been there and done that, instead I was pleasantly surprised and utterly charmed. A must see
The film screens
Fri, Apr 25 - 9:30PM - Scotiabank 3
Sat, Apr 26 - 1:00PM - Scotiabank 4
Fri, May 2 - 7:00PM - Fox

Ai Weiwei: The Fake Case
Portrait of a man under pressure. Following Ai Weiwei under house arrest and fighting an ridiculous lawsuit brought by the Chinese government. A great companion piece to Ai Weiwei Never Sorry this is a film that shows the cost of being a dissenter and is a marvelous portrait of the man as human being. A must see.
The Film Screens:
Sat, Apr 26 - 4:30PM - Lightbox 1
Sun, Apr 27 - 1:00PM - Hart House
Fri, May 2 - 6:00PM - Bloor

WHITEY: United States of America v. James J. Bulger
CNN film by Joe Berlinger looks at the relationship of gangster Whitey Bulger to various law enforcement agencies and the corruption that kept him out of prison for decades. beginning with the start of the Bolger trial the film talks to the various participants in the trial who weave the story of Bulger and his crimes.  Good, if a tad slow and flashy, look at  the Bulger story. Not bad as these things go- and one of the better Bolger docs out there.
The film Screens:
Premiere - Sun, Apr 27 - 9:00PM - Bloor
Screening 2 - Mon, Apr 28 - 1:00PM - Lightbox 1
Screening 3 - Sun, May 4 - 9:30PM - Bloor

DOC OF THE DEAD
For this we have a guest reviewer. I saw Doc of the Dead with my brother Joe, a man who has seen the vast majority of zombie films made in the last 50 years. Since he's the expert I thought it best to review the film:
Doc of The Dead is marketed as "The Definitive Zombie Culture Documentary," but it's far too short to be definitive. The film is very good and is a who's who in zombie culture but each part of the film could easily cover an hour and there are some glaring omissions, Romero's "Survival of the Dead" and the Cuban film "Juan of the Dead." I found myself wanting the individual pieces to be longer and more in depth. Still, anyone who is interested in the zombie genre should give this one a look.
Doc of the Dead will have a special 1-week digital release on iTunes 24 hours after it's Hot Docs premiere on Sat, April 26.
Premiere - Sat, Apr 26 - 12:00AM Midnight - Bloor
Screening 2 - Sun, Apr 27 - 9:30PM - Hart House
Screening 3 - Sat, May 3 - 9:45PM - Royal
Posted by Steve Kopian at April 28, 2014