Tribeca Day 10: How to spot Bjork from far away (THIS TIME NEXT YEAR and BIOPHILLIA LIVE)

Actually yesterday was my last day of physically going to the Tribeca Film Festival. I still have to find the time to go through three features and about 25 shorts on the online library before midnight tonight when it closes down. (weeeeee!)

The last couple of days have been interesting as you can tell the people who have been doing press screenings for the last month from those who just came in for the festival and a few screening. We long haul reviewers have a shuffling gait and a ten thousand yard stare. We also begin every conversation with "I'm freaking tired". I want anyone who thinks movie reviewing is easy to do Tribeca's month of screenings, cover other films, work other jobs and remain up to date with your writing- as in write up every-or almost every film. You'll be the walking dead too.

Right now I have three pieces to finish on three of the best films of the festival The Body (supplemented with material with the filmmakers), Zombeavers and Slaying the Badger. I also have a wrap up post to do and an essay piece on James Randi that was sparked by a conversation with my friend Nora.

Yesterday was a long killer day. I was out of my house by 730 am I got in after midnight and except for two films, a play and dinner with John I was on my feet or walking for most of it.

The first film of the day was the sparsely attended  THIS TIME NEXT YEAR.  The film is the story of Long Beach Island off the coast of New Jersey following several people and families as they try to put their lives back together following Super Storm Sandy. The film follows them from days after the storm until Christmas last year (2013).

A sort of we can do anything, we're not going, life goes on documentary  the film is essentially a 90 minute statement of standing strong. Thats all well and good but the depth of detail is little more than some of the public service spots that ran after the film. There are moments here but they are kind of lost in the repetition of "this is my home" and a refusal to go deeper into details. When you get a something such as the Thanksgiving breakdown of the man everyone turned to you can't help but be moved,but there should have been much more of that. Its a 90 minute film that at least a half an hour too long for what it is (The Tribeca material lists it as 110 but it wasn't that long at the press screening and had it been that long I would have fled to the street) Well intentioned but nothing special.

After the screening I headed over to Cinema Village to get pictures of Mondo's review of The Girl and Death in the window. A mix of my pictures and Mondo's can be found here.

From there I headed down to the Tribeca Storyscapes sadly only to find that they only opened at 1PM. I and the several other people milling about found this out from one of the volunteers who was waiting to be let in. Apparently despite the heavy promotion for the event elsewhere at the festival unless you checked the website there was no indication of the time it was open. On the plus side I got to meet the charming Louise. On the negative I had to leave before going into see a play.

The play was THE  MYSTERY OF IRMA VEP a revival of the Charles Ludlum two-hander full of penny dreadful spoofing and quick change artistry. When done right its one of the funniest plays I've seen. Here it was done very well and I laughed and had a good time at something other than a movie. I also was happy that friends from the day job who were there also liked it. 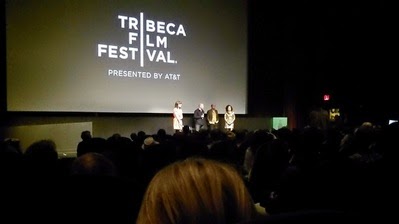 After the show a change in plan as dinner was pushed back as John took care of an ailing Randi. After a huge zigzag that had me going from The Lucille Lortel Theater on Christopher Street on the Westside to Union Square Park and then back to 23rd and 9th all on foot and sometimes in the pouring rain, I met John for dinner.  As always the company was good.

Because the the lines for many shows started early we headed over to the SVA theater about 90 minutes before start time and ended up very close to the front of the line. That was cool and unexpected.

Inside we grabbed some seats and hunkered down for the show- which we kind of expected not to include Bjork and the directors since they canceled the red carpet arrivals.

To our surprise Bjork and the directors were there (see photos) and after introducing the film promised to come back for Q&A.

John is going to do a review. He's the Bjork fan. For me the non-fan it was an okay concert film of a difficult concept album (Songs are about molecular combinations and tectonic plates moving). Visually its amazing but made me wonder why with all the layered visuals it wasn't in 3D since in 3D this would have been a must see for everyone instead of largely for Bjork fans.

The Q&A was mixed with one person asking Bjork if she was going to ever finish a cancel South America tour (no answer) and giving her a book she really liked, while another was a discussion of the odd instruments that were used in the concert. We ducked out early, which was good since I got home later than expected.

And with that the last of my on the ground Tribeca reports is done. Now to attack the online and to finish the multiple reviews and interview I have hanging over my head. 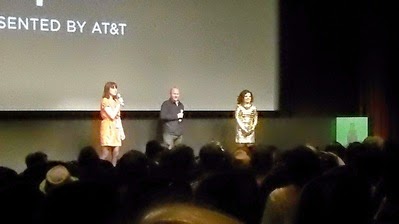