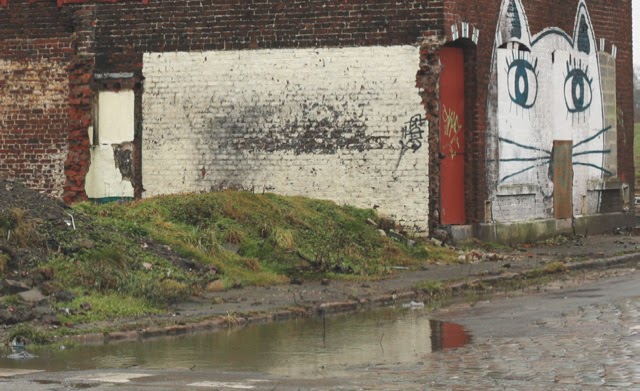 To see this portrait of the run down Union District in Northern France is to see the end of a once bustling industrial area. Images of bricked up buildings and garbage are matched with narration from people who live and lived in the area as well as some poetic lines in Arabic.

The beauty of abandoned buildings is matched with the sad stories of the decline of the area. This is the sort of thing that one falls into when you see it on a big screen.

The film is at times trippy as the filmmakers manipulate the images so that a buildings twist ever so slightly, curtains flap oddly or a river runs backwards and forwards. The effect is alternately hypnotic and disorienting until you catch it since it seems like something is wrong with your vision. I felt like was wrong with me until I realized it was the film and I could just go with it.

I'm not sure what I think of the film.  See it is certainly an experience, and it is frequently quite beautiful, however even at only 22 minutes the film kind of runs out of steam. There is a sameness to some of images that is reinforced by the fact that we see some of the buildings several times through its short run time. It made me wonder how big is this area anyway, a block or two? Its not a bad film but at the same time  if this were the only film I was seeing I'd be disappointed.

The film plays April 20th with the film Dust Breeding. For details go here.
Posted by Steve Kopian at April 07, 2014

Email ThisBlogThis!Share to TwitterShare to FacebookShare to Pinterest
Labels: art of the real, documentary, france