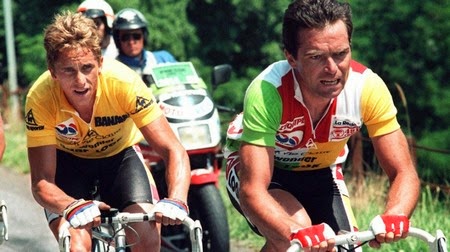 As unlikely as it sound it could be that the best spy thriller of the year is a sports documentary about bicycle racing and the Tour de France. As crazy as that sounds I think an argument could be made to support that position, I know because I’ve heard people rally for that position, and having seen Slaying the Badger I can heartily agree with it as well.

Telling the story of Greg LeMond and his days in professional cycling, the film relates how LeMond discovered cycling and quickly rose to become the best rider in America. The stories of his ability traveled to Europe where he was viewed as the perfect person to take the place of then reigning champion Bernard Hinault aka The Badger. If LeMond would come to Europe he would be groomed by Hinault to become the best in the world and when he retired he would be the heir to his legacy. LeMond jumped at the chance but soon found out things were not as promised.

A wonderfully twisted tale that plays out like the best espionage thrillers with double and triple crosses and everyone out for themselves, this is a story that will keep you riveted to your seat as you try to figure out what’s going to happen next…even if you know what’s going to happen next. That’s the key here, what happened is a matter of record, but like all good stories while we think we know what happened, all we really know is what happened on the surface, and what was happening below it and behind the scenes was something else entirely and absolutely fascinating.

We get filled in on all the behind scenes games by most of the people who lived it. Lemonde and his wife Kathy are interviewed, as is the Badger himself, LeMonde’s dad, the team coach, and several reporters who covered the races. The stories told are so detailed it’s not so much as you are there but you are living it. We’re not watching the races but reliving them. I’ve seen the film twice now even on the second go through the perspective of seeing events from now is obliterated and we go through events as if we are back in 1986. The outcome is always in doubt, and we’re forced to wonder will it turn out the same way this time?

This is the way all documentaries should be- eye opening and gripping even when you know how it all went down.

You must see this film, and if you can do so on a big screen do so where the race footage will suck you in even more. (I was afraid when I saw this the second time that it would play less well because of the loss of scale, but the story is just so compelling it loses almost nothing)