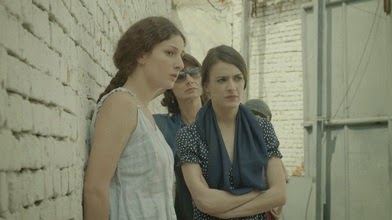 Based on the directors own life Brides is the story of  Nutsa who is married to Goga. Goga has been arrested and sent to prison for ten years. The trouble is that not being married to Goga, Nutsa has no way to see him. Staging a jail house wedding the pair can now see each other at their monthly meetings, however the time apart takes its toll on the pair and the relationship....

This is a really good drama that scores many points for shedding light on a part of life that I never knew existed. Yes I knew that Eastern European prisons could be tough but I never imagined the weird games that they would play to keep families apart. If I wasn't already happy I wasn't locked up in prison, this film makes me doubly happy that I'm not locked up in Georgia (the country not the state).

Focusing almost completely on Nutsa, played by the absolutely amazing Mari Kitia. This is one woman's story of trying to cope with a terrible situation. How do you deal with the love of your life being locked away? This film gives you a pretty good idea. It also shows you the complications of trying to deal with the kids, what do you tell the kids, they are told he's in the army, but at the same time they know something is up and chafe at going to the terrible place.

While I love much of the film, I'm less enamored of the final thirty minutes or so of the film. The final sequence is an extended one where Nutsa and Goga are allowed to spend a 24 hour period together in a small apartment. The sequence is frequently  touching as the pair try to reconnect but it also just sort of goes on as if they had to get the film to a certain length. My problem is that when the sequence and the film ends, the film is kind of left in limbo regarding the outcome of an event that seems to come from left filed.

In reading an interview with the director in the press notes we are supposed to remember the several references to Mishimia's story Patriotism  to infer a very dark ending. I'm not sure that it works. Tinatin Kajtishvili says that the ending, like the entire script, was crafted with input from her jailed husband who said that the only way the film makes sense is to end it this way-and he gave reasons (which I won't relate here since I don't want to spoil everything). I'm not certain that he;s right, certainly the film doesn't need the certainty of the ending, nor do I think that his reasoning holds up since it infers a great number of things we don't know, not the least of which is Goga's state of mind and the other is Nutsa's relationships outside of her husband. I think some how the very end weakens the film, just as the the long sequence preceding it makes the film lose focus.

Yea I know that makes no sense unless you've seen the film, and it may have given you some spoilers, but  at the same time I had to say something because this really great film stumbles a bit at the end.

Stumble or no this is a a film you should make an effort to see when it plays at Tribeca.