You think our Tribeca coverage is done? Hell no. 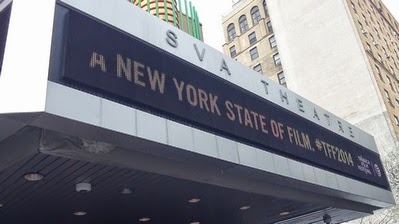 Tribeca is wrapping up as this posts.

Its been 12 crazy days of screening for the public, for those of us in the press its been over a month of crazy screenings. I think I personally saw around 70 feature films, all of us together saw I think over 80. I have no idea how many shorts we saw. Mondo waded in to the Storyscapes...

We saw and did so much that there we've got seven more days of multiple reviews reviews coming up- and that's just what I have scheduled- what I don't have scheduled are more from Mondocurry, more from Chocko (including Sophia Loren), more from John and stuff from Hubert.

In addition to what's already slotted I'm finishing up full reviews on three of the best of fest films, Slaying the Badger, Zombeavers and the short The Body. I have two posts (shorts and features) on what I saw in the on-line press library. I have a long piece on James The Amazing Randi sparked by seeing The Honest Liar a second time. And I also have the interview I did with the director of Gueros.  Chocko has red carpet and film coverage coming. John and Hubert have reviews. And Mondo has a look at Storyscapes and other goodies.

Simply put keep reading because we have enough to keep Tribeca going for another week at least.
Posted by Steve Kopian at April 27, 2014

Email ThisBlogThis!Share to TwitterShare to FacebookShare to Pinterest
Labels: tribeca 2014