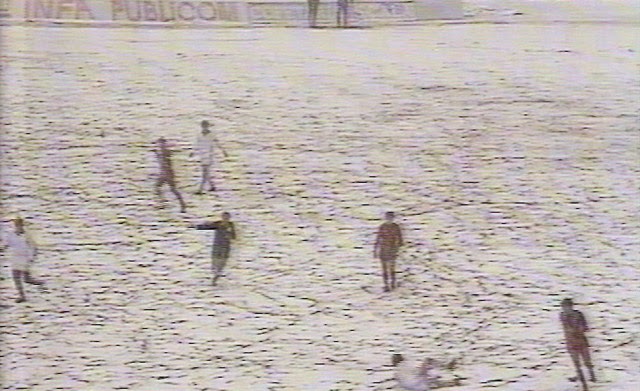 Must see opening night film of this year's Art of the Real is deceptively simple- Director Corneliu Porumboiu and his father watch a soccer game that took place between two of Romania's top teams during a raging snow storm in 1988. The elder Porumboiu was one of the referees for the game.  Over the course of the game (we only see the game) which plays out in real time we listen in as father and son talk about the game, their lives and the history of the country.

If a documentary has to document something, this film documents one moment in time between the father and son. Its a film that also documents the changes in a country over a 25 year period as they mention, oh so casually the changes that occurred since the game took place.

For me the film is a utterly facinating since its like being a fly on the wall during a good conversation. It also gives one a sense of what life was like in Romania before and after the revolution. Granted some of the details are small ones, about say how players left to play the game elsewhere after but it's still informative.

If there is any flaw its that the conversation some times trails off and we are left to just watch the game. While the silences are understandable, we are listening in on a real time conversation, some of the breaks seem a tad long.

A super film that does what very few documentaries do, namely putting us in the moment and forcing us to reflect on subjects of a wider variety.

This plays tomorrow night and Monday. For tickets and details go here.
Posted by Steve Kopian at April 10, 2014

Email ThisBlogThis!Share to TwitterShare to FacebookShare to Pinterest
Labels: art of the real, documentary, experimental, romania