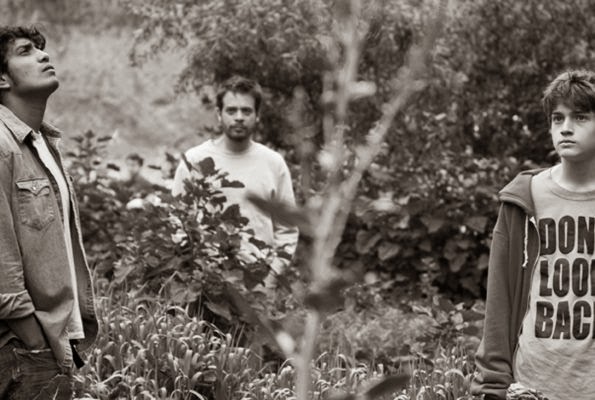 The Tribeca write up for Gueros talks about it being a calling card for a new cinematic force- and damn aren't they on target. Say what you will Gueros is the calling card of someone who may very well be a force to be reckoned with.

The plot of the film has teenage Tomas being sent to live with his brother who is a student at the university in Mexico City. His mother can't handle him and for whatever reason she sends him there. When Tomas arrives he finds that his brother and his roommate are living without power and kind of partaking in the student strike that has closed down the University. When they find out one of Tomas's favorite musicians is dying the three young men are off on a road trip to find him.

This film is really good, No I mean its really really good. Its funny and touching and a great deal of fun.

The real talk here is going to be about director Alonso Ruizpalacios, who may very well be a genius. It's hard to tell at first since he fills the film with so much quirkiness for much of the first half that he's not telling a story so much as showing off and it really pissed me off. We didn't need the fancy camera shots, the references to other films, the sense he was riffing on Jim Jarmusch, David Lynch, Wes Anderson and others. Too much early on the film simply feels like a show reel and not a tight feature. Eventually the showiness settles down and the film sucks you in. The quirks, the references and the cool twists in this later part are joys and not showing off since they fit the film. (I will not say more since the fun of the film is finding out where the film is going and what he's doing really)

You'll want to see this. Trust me. This is going to become a cult film and director Ruizpalacios is going to get a reputation- at least for the short term. Will he be able to keep up the Oh Wow factor? I don't know- but it will be fun to watch him try.
Posted by Steve Kopian at April 17, 2014