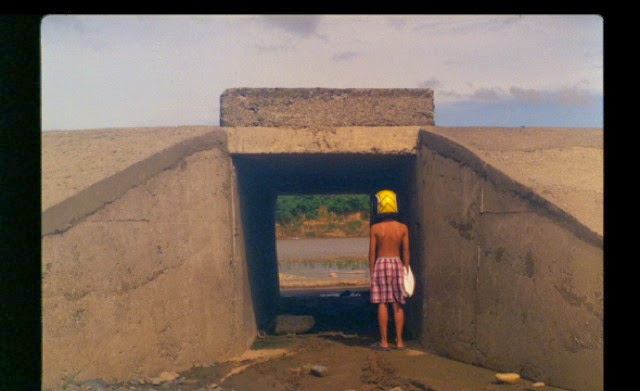 There is story involved with my seeing this film, I’m not sure if it’s good bad or indifferent but there is a story.

When the Art of the Real series was announced I was excited because there was some really good looking films included in the line-up there were a few films I really wanted to see. Unfortunately because of when the festival runs (During the week before and during Tribeca) I was unlikely to see any of the films during the festival. Additionally because of when the press screenings were scheduled I was shut out from attending due to complications with the day job (I had to be at work and because of the snow this year I’m down days off). I knew I could get up some coverage through other means but I couldn’t do things the way I had hoped. The a stray comment brought me access to a bunch of the films that were playing in the series through a kind gesture.

To be quite honest Lukas the Strange was not on my list of films to see. I didn’t have any interest in seeing this film. I had no intention in seeing this film and given my druthers, until I saw the film I would have gone out of my way not to see the film. The only reason I actually saw the film was simply that at the time I saw it  my choices were severely limited and I simply went down the list of what was available until I hit something that worked. This worked and because I was desperate to fill a slot I plopped down in my seat and gave the movie a go.

This is a wonderfully weird hybrid of documentary and fiction about a young man’s quest for self after his father declares he’s a horse spirit and walks off into the jungle and a film crew shows up and begins to make a movie.

Watching the film, watching how the various pieces came together and are stirred with the wonderful score I drifted off into the jungle. I rapidly stopped caring about plot and simply went wherever the film took me. I surfed on the feelings and emotions the film kicked up. The film became less a documentary/narrative hybrid and more an experimental tone poem. The film became less a film and more an experience.

For me the joy of the film was being taken out of the here and now and being placed in the then and there. That sense of dislocation, of leaving our world and worries behind is the reason we go to the movies, but even with the great films, it’s rare that we get such a real dislocation, or relocations of our psyche as I had with this film. For its running time I was somewhere else not concerned with the world I was physically in.

Of course I can’t guarantee that you’ll have the same experience I did, but for me this was something special.

If you want to take a chance and perhaps see something that will put you somewhere else you may want to see this when it plays April 18th and 20th. Details can be found here.
Posted by Steve Kopian at April 12, 2014