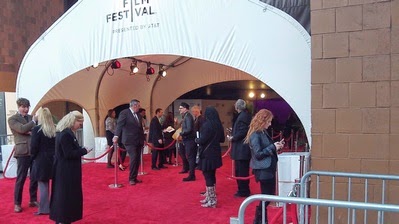 Day 7 was even more low key than yesterday. I spent much of the day either watching movies or talking to Joe Bendel between movies or at lunch at Lucky Burger. Like at this years New York International Children's Film Festival we seem to keep choosing the same movies.

The movies today were an okay group of films. I'm sure a couple of these will get bigger write ups over the next few days, but for right now the little blurbs that follow are all I can manage.

FAMOUS NATHANS- The grandson of Nathan takes a look at the restaurants that his grandfather started and at the dynamics of his family and extended family. Almost certain to make you feel hungry this is a film that kind of disappointed me. Its not so much that its bad, more that the way its put together-it jumps around in time and space and focus between family and business- seems to indicate that the filmmaker was much too close to the material to make a truly great film. As it stands now its a very good one, with a couple of extra points if you're a New Yorker of know Nathan's in Coney Island.

SILENCED is the story of three people charged under the 1917 espionage act-a law so arcane only 3 people had been charged between 1917 and 2001. The people are all ex-intelligence agency workers who acted as whistleblowers to government misdeeds only to find themselves abused by the government who wanted to shut them and others like them up. I like the film, but if you have an interest in the subject this isn't anything new. To me the most interesting story is that of Thomas Drake who was charged for answering Congressional questions I wish more of the film had been on him. Very much an important film, especially if you haven't heard the stories, you need to see this will depend on how much you know.

I only saw half THE OVERNIGHTERS. The reason I only saw half was that I really wanted to see the film after talk by other writers made me salivate. The trouble was there was no way I could see either public screening which left only the ability to see part of the press one if I wanted not to lose other films I had committed to. Based on what I saw this is one of the better films of the festival. The story of the small town of Williston North Dakota and the influx of men looking for work is one that will stick with you. Its about a lot of men drawn by the chance to make big bucks in the fracing industry. As they flood into the state they have nowhere to live and a local pastor tries to do the Christian thing by giving them a place to stay. Its great people dealing with real issues. I can't wait to see the rest. As I said one of the best (?) of the fest.

ELECTRIC SLIDE has me stumped. Give it many points for being unique-but I don't know if that means its its good. The story of Eddie Dodson, a gentleman bandit who robbed over 60 banks in order to pay for his lifestyle is told in a kind of countdown fashion from Eddie's "rise" to fall. Full of eclectic 80's music, witty dialog and style to burn the film annoyed several people at the screening. It moves to its own beat so this is a film you wither buy into or go crazy with. I have no idea what to say except there is no other film like it at Tribeca which may be good or bad. That said if you want to see something unique run out to see this over the next 3 days because this is the sort of film that just may fall through the cracks since I don't know how the hell you'd promote it successfully.

The final two films of the day were screening under the heading 30 FOR 30 SOCCER STORIES and are two short ESPN films. The combined running times is listed as 53 minutes but we were done in under 45. They are okay films but their brief nature makes me wonder why they are at Tribeca-even with the post screening talk.

MARADONA '86 is a portrait of the fall and rise of soccer legend Argentinian Diego Maradona who dashed his countries 1982 World Cup hopes by being red carded in one of the matches. The film then charts his return to favor in 1986. Made up entirely of footage from the period with passages of  Soccer Sun and Shadow read over it. I'm not sure what I think of it. It kind of plays like Wagnerian idol worship, which is fine, but it doesn't add up to much if you're not already one of the converted.

THE OPPOSITION is another poser. The story of the 1974 World Cup team from Chile, the film focuses on how the National Stadium was turned into a concentration camp after the military coup that toppled the Allende government. Part of a huge story (the coup) this small little part of it suffers from being cut off from a larger context. yea we know enough to follow the story but not enough for it to have deeper meaning. I walked out going Yes and...?

After the films I headed out with Joe. He headed uptown for more movies and I stopped to talk to Chris Bourne who had also been covering the days events. It was a good brief talk that left me regretting seeing Electric Slide since Chris was raving about Jon Favreau's Chef which he said was a must see. While I missed it at Tribeca it is coming out soon. We then split up- I to get home to write and he to get food before the next two films.
Posted by Steve Kopian at April 23, 2014