Tribeca Day 5: Or I had a blast on the red carpet being picked on (MISCONCEPTION, THE SEARCH FOR GENERAL TSO, MARAVILLA, BOULEVARD and LOVE AND ENGINEERING) 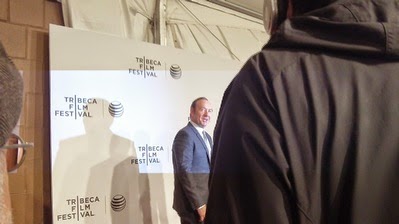 That's Kevin Spacey. I was on the red carpet at the end of the day for the premiere of the film NOW:In the Wings on the World Stage about the production of Richard III that he starred in. I'll be posting lots of pictures soon but know I was in the press pit- the pictures is one that I shot after Spacey has wandered past me.

I want to thank all the photographers in the pit. You guys and girls picked on me mercilessly because of my cheap ass camera, but at the same time you were also very friendly and best of all damn funny. I haven't had that much fun in a long time. Thank you for giving me one of the best memories of this years film festival.

Earlier in the day I spent time bopping in and out of movies and running into various other members of the Unseen crew.

I started the day at MISCONCEPTION a film about the myths and truths of the population explosion. I had wandered in for a little bit because Mondocurry seemed very interested in the film. I wanted to at least give the film a try in part so I saw about a half an hour before I wandered into the next theater. I liked what I saw and I can't wait to read Mondo's review of the film.

THE SEARCH FOR GENERAL TSO is a super film about finding the origin of what is now the second most popular ethnic food in America behind pizza. A wonderful look at the food, the General (there really was a General Tso) and the assimilation of the Chinese in America. I really liked it and I can't wait to read what John has to say on the film. (I wonder if he caught the goof which has Tso living from 1644 to 1911) Also attending the screening was Alec who was extremely sleep deprived because he has been working like mad on two film productions.

After the film I asked John and Alex if they wanted to grab a quick bite. John declined having calls to make. Alec however joined me and we went and had a quick bite...running into Chocko along the way.

MARAVILLA is a very good documentary on the career of boxing champ Sergio Martinez.Focusing on the period where Martinez was stripped of his title because he wouldn't face the mandatory opponent and the subsequent chase to arrange a fight with Julio Cesar Chavez Jr. I liked its take no prisoners approach that savages the boxing commission and some people in boxing.  Being a boxing fan I had no trouble following things so I asked Alec what he thought and he liked it. He had no trouble with anything presented so I have no trouble recommending the film.

I have to get back to you about BOULEVARD. This is the new Robin Williams drama about a man who's life changes after he picks up a young man on the street. I say this because 20 minutes in I found that I was doing the wrong sort of drifting off. I wasn't engaging with the film for reasons other than the film. I had pretty much hit the wall. Needing drink and my head cleared of everything I left the theater. I couldn't in good conscious stay and review a film that was never going to have a fair chance with me. I'll pick it up later.

After sometime in the sun and a trip to the press lounge I dove back in for LOVE AND ENGINEERING. Mondo is going to be wading in with the official Unseen review and an interview (on which he was assisted by Chocko) but I want to get my two cents in by saying the film is a blast. Its essentially a faux documentary about a married engineer trying to approach love scientifically so his friends can find women. Funny, touching and very thoughtful, this is a wonderful film completely off the beaten track as far as how romance films go.

After that I headed down town to do battle with the photographers.

ADDENDUM:
I've posted some of the photos from tonight at tumblr
Kevin Spacey, Mary Stewart Masterson and Kim Cattrall on the red carpet
Beautiful young Shakespearean women
Posted by Steve Kopian at April 21, 2014