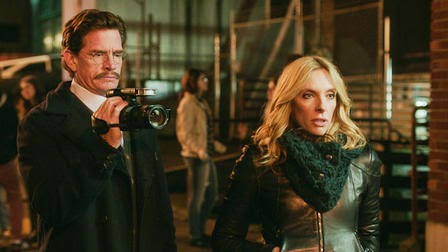 I didn't want to see this film.

I really didn't want to see this film

The only reason I saw this film was because I was seeing other films on the day this screened and decided to stay.

I'm so glad I saw this film because, god damn its a funny heart warming film that just makes you feel good.

Toni Collette plays a rock critic who is told by her boss to track down whether a once legendary superstar was alive or dead. Collete wants nothing to do with it since said superstar was her ex-boyfriend and there is too much baggage to get through. Given the choice of doing the story or being fired she does the story-along the way meeting a young singer whom she falls in love with and a loopy rich ex-boyfriend who wants to make documentaries who tags along for the ride.

Powered by great performances and a killer script this film is a keeper. This is going to be one of those films you return to again and again. Trust me by the time the film ends you're going to want to go back and do it all again because you've fallen in love with everyone. You'll also want to go back and laugh your ass off at several scenes that are so funny I missed lines because I was laughing to hard.

If that isn't enough for you the film also has one the best music tracks of the year. Trust me when you're done, you're going to be like me and want to track down all of the songs, both those performed and those heard in the background.