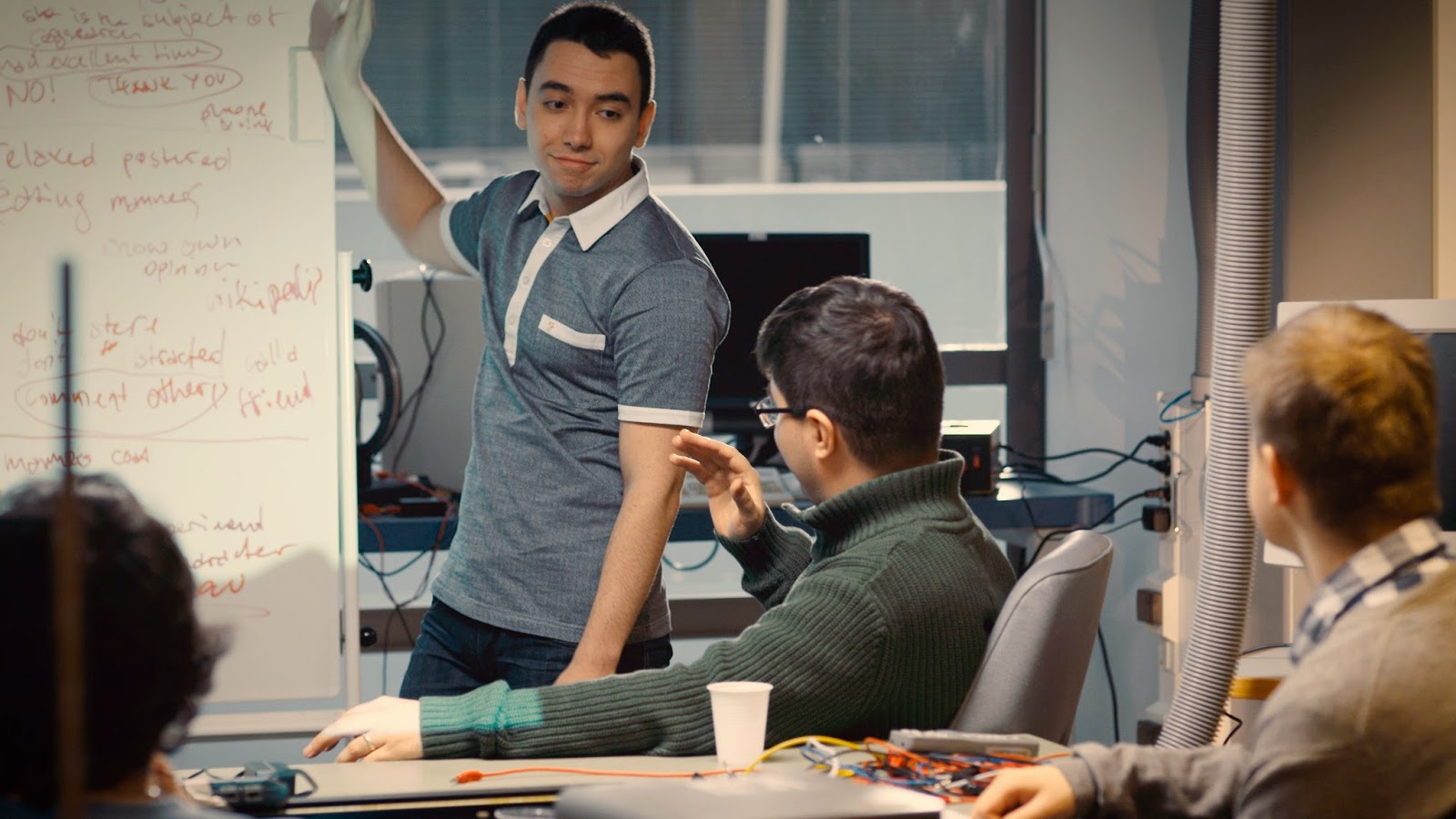 Even though Love and Engineering is a documentary, it can at times feel like science fiction. There are protagonists, and there is a simple quest at hand: to see if love could be defined as a quantifiable concept thus allowing it to be conquered.

The cinematography is a glimmering florescent at times and combined with the modern feeling of the city of Helsinki can give a sense of looking at a constructed vision of the future. Adding to the mystique are occasional views of a cavernous bluish black room filled with rows of computer banks flickering blurrily. There is also a wonderfully catchy electro pop score, which I have not been able to get out of my head some weeks later.

IT engineer Anatas is something of a main character here, as he has devised a means, several actually, of finding out the answer. The fellow engineers in the film are like supporting characters, serving as something of a combination of subjects to observe, causes whom he tries to help (he coaches some through mock dinner dates via earpieces connected to a walkie talkie), and allies aiding him in his quest. 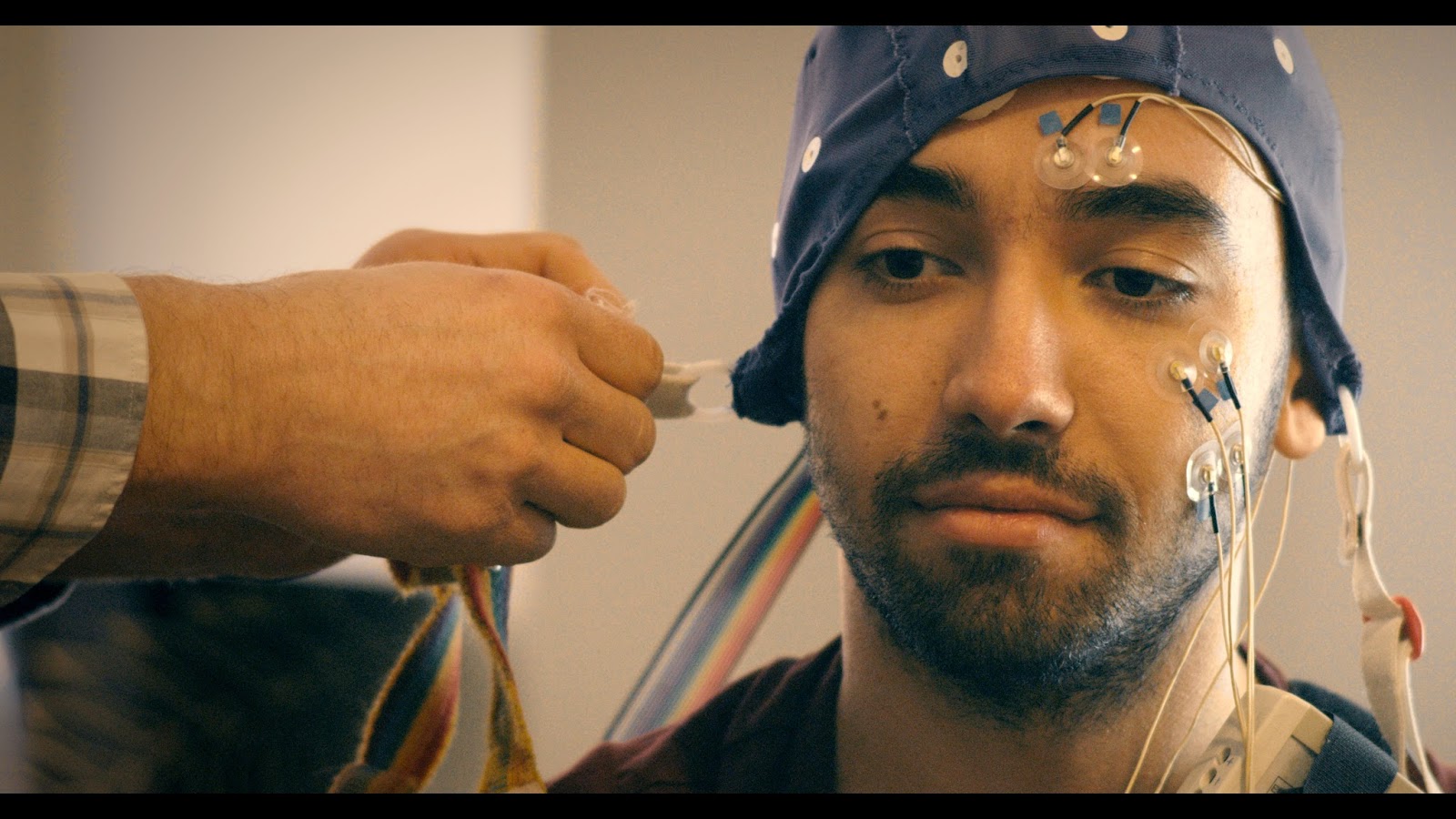 Various means of cracking away at the mystery of human attraction are employed, some humorous, like the coached dates described above, and some amazingly scientific, with participants hooked up to various wires and patches producing intense amounts of data. References to chemicals produced in the body and brain activity suggest the issue is being very meticulously researched.

But there are also amazing instances of humanness emerging from the circuitry. To varying degrees, the subjects change in ways that are delightful to behold. One takes on a persona of the ‘captain’ when wearing the uniform of a cruise ship commander makes him realize newfound ability to project confidence. Todor, perhaps the most engaging of characters shows an amazing growth in his sense of self-awareness, discovering that making progress toward finding a romantic connection leads to as much frustration as it does satisfaction, when difficulties arise that cannot be clearly calculated. His experiences speak to a truth of people shielding themselves from the hurt of rejection and difficulties of starting over by keeping to themselves.

Some aspects of the challenges facing these individuals working in highly specialized fields is illustrated very clearly with no need to show explanations or moments of discussion. Cameras at times survey the subjects’ personal rooms filled with various screens set up, revealing a vast world of interactions outside of that involving two face to face humans. Do these provide enough stimuli to convince one to neglect the latter? Is this sort of interaction in some ways more appealing? More instantly gratifying? Easier to control the outcome of? When it comes time to discuss their feelings about these possible hang ups, the candid answers of the subjects are both fragile and insightful, and relatable to the universal struggle of finding one with whom to share mutual affection.

Between Anatas’ practical ‘attraction hacks’, scientifically rendered truths, and social ventures outside of their comfort zone both with one another and in talking with potential girlfriends, Love And Engineering is bursting with discoveries at every level. I know I heard several murmured aha’s from amid the audience at key moments. You may want to bring a pen and notebook so you can refer to these ideas later in your own pursuits.

LOVE AND ENGINEERING screens Thursday the 24th and Saturday the 26th.  Click here for moreinformation or to buy tickets.
Posted by mondo_curry at April 23, 2014