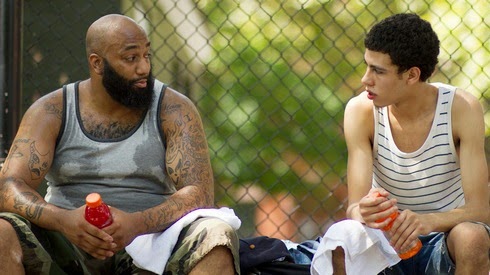 The Brooklyn lensed Five Star tells the dual intersecting stories of John and Primo. John is a young man trying to get over the death of his recently deceased absentee father. John wants to know something about the man his father was. He also just wants to try and survive on the streets where people end up dead with a frightening frequency. Primo was a friend of the John’s dad. He’s a five star, a leader in the Blood gang. He desperately wants out of the life so that he can provide a better life for his growing family. He’s also looking to continue to make money and to that end he offers to take John into the life and act as a kind of surrogate father for the young man.

Actually the film achieves true greatness during the sequences focusing on Primo and his life. Played by James "Primo" Grant, the character is based in large part the actors life, with his kids playing his kids, his fiance playing his fiancé and the details largely lining up. These sequences seem less drama and more real. If you removed John from the film and simply focused on Primo you could very well release the film as a documentary and no one would ever know. This is as real a film as you are likely to find anywhere. Not to put too fine a point on it these sequences, where Primo talks about his life, or interacts with his family are among my most favorite of the year. Additionally Grant is a true stand out and if there is any justice he’s going to be a huge actor since within the confines of this small film he shows he can literally do it all from comedy to drama to bad ass.

The problem with the film are the sequences with John. Saddled with the dramatic narrative the film falters here as John goes through some very cliché sequences that are dramatically fine, but could have been lifted from any urban/crime coming of age stories going back to the 1930’s (which was pointed out to me by Peter who liked the film more than I did). There is also a period late in the game involving the delivery/nondelivery of a package that seems to have been shuttled in from another film. Admittedly it doesn’t help that John’s sequences are full of actors who are all over the place in their abilities. While this adds a certain verite to the proceedings, it does make the it clear some people are acting or trying to.

I will say that one of pluses all the way around is the ending which puts what the film is really about into perspective. Its one of those endings that makes you want to see the film again because you’ll want to see it knowing what the real point of it all is.
Posted by Steve Kopian at April 21, 2014