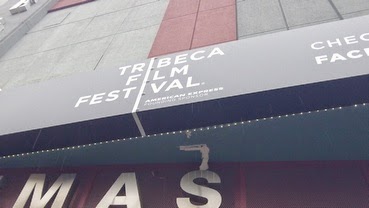 This is the last Nightcap for the next two or three weeks-Tribeca starts Wednesday, and already I’m blindly tired. For me the Festival started back in early March when the titles were announced and I began trying to run down titles. Actually I had run across three films in a manner unconnected to Tribeca and wrote them up. I've moved things around  so those reviews (Ice Poison, Broken Hill Blues and Der Samurai) will appear on the next three days.

As those of you who have been reading Unseen during past festivals know for the next three weeks we will be pretty much all Tribeca all the time. We’ll be running reviews of over 80 of the 89 features and a yet to be determined number of shorts, plus reports from the red carpet, from inside the screenings and from the various talks.

We’re also doing something differently this year, one of us, Hubert, is going to the festival as a regular film goer. What this means is that Hubert is not going to so much be reviewing and reporting on the films, rather he’s going to be letting you know what it’s like to be there. If he sees something or over hears your conversation or catches you doing something he’ll be writing about it. I‘ve always said that true coverage of a festival is reporting from the trenches and Hubert is going to do just that.

As for the rest of us we’ll be doing press stuff, interviews, press screenings and an occasional public one. What Mondo, Chocko, John and myself will be providing is the same coverage as we’ve done in the past- too much in too little time.

And if Tribeca wasn’t bad enough expect coverage of Subway Cinema’s Old School Kung Fu Festival next weekend, plus coverage of some films from the Hot Docs Film Festival, and maybe some more Art of the Real.

To be honest I’m expecting my brain to explode by Friday at noon.

There is going to be so much being reported on that if we do this right you’ll think you’ve gone to the festival just by reading our reports.

For those who are curious the following is a list of films we've seen so far (Must sees are indicated). All will be getting reviews:

As I said there are at least another 40 more titles coming so keep reading.
Posted by Steve Kopian at April 13, 2014