Fields of Distant Dreams: Beneath The Harvest Sky (Tribeca, 2014) 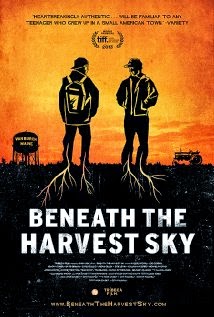 Beneath The Harvest Sky may be a difficult film to pin down, but it is very easy to appreciate. The former because it refuses to work in just one mode. In some ways it is a very authentic document of youth culture in a particular time and place – that being a small town in Maine along the Canadian border. It also includes a drama of two of teenaged friends, Kasper and Dominic, as they face the end of high school and the possibility of setting out together or veering off on different paths. Finally, within the film is a slow boiling crime drama based around drug smuggling across the Canadian border; this is carried out by Kasper’s father (an electric Aidan Gillen whose smile is equally persuasive and frightening) and uncle and puts them in at risk of serious trouble as a hardened DEA agent, played by Delaney Williams (of The Wire), keeps a watchful eye on their activity.

The latter is also so because despite these disparate elements, the film never feels disjointed. No matter what is happening, it flows smoothly with the beat of consistently believable regional dialogue and a setting both full of natural beauty and possessing an air of impoverished ruin. This is mtached by a soundtrack filled with strummed guitars and guttural cries, perfectly tuned in to the barren pits and roughly hewn terrain.

Kasper and Dominic deal with many of the pressing issues faced by teens growing up in less economically enriched environments. Kasper’s girlfriend informs him that she is pregnant, and he harbors resentment toward his divorced parents, particularly his mother whose boyfriend, he rails against. Both of them constantly get into trouble at school. The common ground that ties them together the most is a desire to leave the town in pursuit of better things. 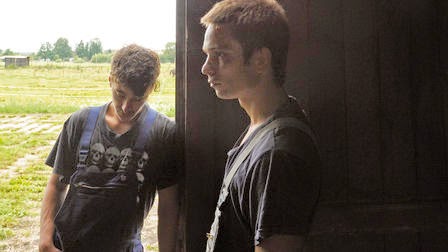 Yet despite their similarities and extremely close bond, there are understated but easy to see differences between them. While Kasper comes from instability, his father’s illegal activity being an influence on his decisions, and carries himself as a storm of unrest, Dominic seems to be able to maintain a more even keeled path. He holds down an exhausting job harvesting potatoes, steadily saving money for a used car he’s had his eye on, while falling into a slowly budding relationship with a girl working beside him in the fields.

As Kasper falls further into the drug related crimes carried out by his father, a rift between the friends threatens to grow, as well as a question of setting out for a different place as opposed to remaining behind and continuing to make money trafficking drugs, something tantamount to being stuck in a rut. Adults are not left entirely out of the picture, though as they also deal with the hardships of life in an economically depressed town. We find this especially with Kasper’s father and uncle, Badger, when their relationship is threatened by a law enforcement operation that is continually closing in on their activity.

All of these elements are engaging, yet the standout is the first. When showing teens in their natural element, nothing feels polished, nor any punches pulled. Whether discussing their future, butting heads with a group from another town at an outdoor party lit by oil drum fires, or arguing over issues of trust, the talk is always raw. Every conversation seems to threaten a small explosion, a wave of colorful emotion blasting out from otherwise gray and hazy dusks and dawns.

BENEATH THE HARVEST SKY screens Friday, April 18, Thursday, the 24th, Saturday the 26th, and Sunday, the 27th. Click here for more info and to buy tickets.