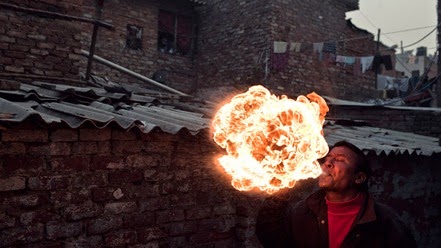 A look at the Kathputli colony outside of Dehli. The colony started as a tent camp for various street and classical performers (magicians, puppeteers, acrobats ect), many of whom have traveled the world as cultural ambassadors. Over time their tents became permanent structures...which the government now wants gone so they sold the land to developers to build luxury apartments. The performers are now faced with whether or not to accept the promise of free housing to be built elsewhere or fight on.

This is a disappointing film best described as a great opening five minutes, a great closing five minutes and 70 minutes in the middle where people hem and haw and yell at each other a great deal about what they should do. Someone at the press screening I attended described the whole film as "it sucks to be poor in India", and he's kind of right.

I don't see the point. I don't know why I should care, other than they directors telling me this maybe the end of a cultural legacy. Give me something more (if nothing else explain the new ban on street performing that has kept them in poverty).

I wanted to like this. I had hoped to know more about the colony and the arts and see why we should care but there is almost nothing.

A major miss despite a game try.