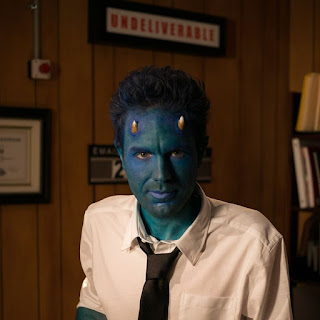 John Mudge's‘s MAILER DAEMON is a wonder. It is a beautifully constructed short film that feels more like a feature. I say this not because it feel long, rather because it has so much going on, in such a perfectly balanced way it seems as though it should have taken us 90 minutes to get to the end not 12.

The plot of the film has a Mailer Daemon who works for Lighthouse Email going through his daily routine, working while smoking and watching TV. Things become complicated when he answers an undeliverable email setting in motion all sorts of troubles.

I don’t know where to begin talking about this wonderful little gem. Starting with an amusing old school TV commercial that explains what happens to you emails this film is nails it. Everything in the film builds on everything else with things that seem like throw away tidbits coming back around to produce a laugh or an “oh that’s what that was” moment writer director Mudge has done what most feature filmmakers never manage which is make a film that hangs together with no lose ends. Everything ties together to make a solid whole. Mudge has also cast the film perfectly with a group of actors who understand his sense of reality perfectly and play everything exactly right.

I am in awe. I have also become a huge fan of Mr Mudge and I want to see what he can do with a feature (Though if he wants to turn out small gems like this I’ll take those too.)

You will notice I have not been forth coming as to what happens in the film. This is intentional. This is a film that you need to see, You need to watch events build and expand. Yea I could tell you what happens but one of the joys of this film is watching how the film turns and turns again as small things become bigger or go unexpectedly. I am also hesitant to really discuss a film that most of you haven’t seen yet. The film is just starting it’s trip to the festivals so I don’t want to spoil anything so far in advance of your seeing it.

Let me end by saying MAILER DAEMON is a great film and John Mudge is a filmmaker to watch.

See MAILER DAEMON at film festivals through out 2020
Posted by Steve Kopian at March 01, 2020