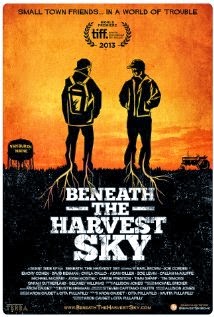 Okay if you don't want to  know go read something else.

Set in Maine near the Canadian border this is the story of two friends Casper and Dominic. Casper is a wild man always in trouble and his friend Dominic is a wonder boy with a bright future. Over the course of summer vacation the pair deal with life, friends and girls.

Wrongly billed as a coming of age story similar to Stand By Me, this film is really the rambling adventures of a couple of teenagers. One works harvesting potatoes to get money for a car and the other deals with a pregnant girlfriend and a family that deals drugs. There are tons of characters that come and go, and lots of plot lines, some of which are resolved...

...and that's where this films problems begin, there is way too much going on. The film has so much going on that the film never really ends, it just goes on and on and on until it stops in one of the biggest what the fuck was that moments of the year.

Think about the all of the plot threads- over the course of the film we have :

Its way way too much with the result that the film kind of feels like its never going to end because there is just too much going on... there is so much going on and with all the characters that our interest becomes split and we don't care. And some of the people around me didn't either since they were snoring.

Twenty minutes in I looked at my watch and groaned because I knew that there was another hour and forty minutes of this nonsense.

And about that ending- what the fuck is that? No really what the hell were the directors thinking? I mean really. If you've read enough of my stuff here at Unseen you know that I hate when films turn serious or they kill off someone out of left field so a movie has meaning. You know I hate when things just change because a writer decides to do something meaningful.

I've always been wary of the death at the end trope even before I read Michael O'Donoghue's National Lampoon piece on how any good writer will end by having a character get hit by a truck. O'Donoghue's story was I thought was the height of silliness until I saw the end of this film. With Maine DEA raiding Casper's father's home, the boys suddenly fear the cops will get their car money which is hidden in abandoned house so they race over there....just as a one house wide rain storm hits and the house begins to collapse... not only does it collapse it collapses and kills Dominic. Why? I don't know, I guess so the end of the film can be meaningful...I also suppose its because it makes the film like all the great works of literature the film alludes to.

Talk about WTF. There is no reason for it, there is minimal foreshadowing, a beam being taken out by a potato. Its a moment that made me throw up my hands and want to scream "YOU CAN'T BE SERIOUS" in my best John McEnroe voice. Its the moment that pushes the film off the okay table in to the poop pile on the floor. It just killed the film.

What a piece of trash....and that's not even going into the frequently annoying music score....please don't get me started...

ADDENDUM- I am fully aware that I am in the minority concerning this film. I fully understand almost everyone else loves it. So be it.
Posted by Steve Kopian at April 28, 2014