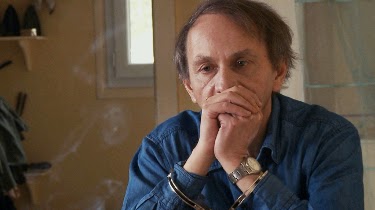 The first film screened for critics was the first surprise of the festival- a wonderful off center comedy that will delight any one who wants a film that really doesn't go where one expects.

Taking speculation as to what happened when writer Michel Houellebecq disappeared during a book tour (he refuses to say what happened) director Guillaume Nicloux has fashioned a dead pan completely unexpected film that has Houellebecq kidnapped for an explained reason and held by three men who always seem to be waiting for word as to what do do with the writer. You will not expect what happens and if you like literate intelligent characters arguing about life and literature I strongly urge you to see this. Though I warn you this can be rather dry- though at the same time its frequently laugh out loud funny.

I am keeping this review short intentionally because the less you know the better it will be to discover it's surprises.

I will say seeing the film was a weird personal experience. Houellebecq's chain smoking and strange ticks reminded me of my mother when she was in one of her Ambien moments. It was very much like watching her up there. A late in the game sequence that involved in part a discussion of the history of Poland played like a family holiday dinner at one of my Aunts.

My personal reaction aside do try to score tickets for this wonderful, charming funny film. Trust me it isn't what you expect.
Posted by Steve Kopian at April 17, 2014