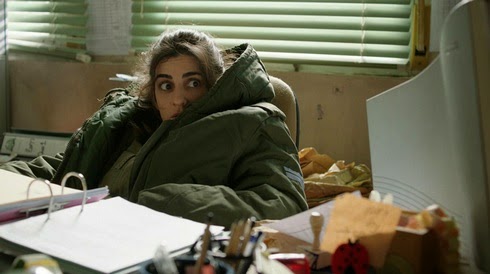 The easy jape at the film would be to say that I have zero motivation to review the film, but that would be overly cruel. Instead I would say that this is a film that some one should have resulted in someone forcibly grabbing the director and forcing her to pick a tone for the film- any freaking tone.

This the story of two young women, Zorah and Daffi,who are in the army and who return to their base after a weekend away. They are in administration and are essentially slacker paper pushers who want to be anywhere but there. The film follows the girls as their close friendship is rocked by a series of events including Daffi's discovery that Zorah never mailed the letters to help her get off the base and reassigned to Tel Aviv.

Having every tone you can think of this film clearly is the work of someone who was trying to do too much with their first film lest they never get a second chance to direct. Nominally a slacker comedy the film swerves through an expose of sexism in the military, suicide, a haunting/possession, near rape, romance, broad low brow humor,  a buddy flick, and I don't know what else. The film goes from horrifying self mutilation to raucous comedy in seconds. I didn't know what to feel.

Like the tone the plot is all over the place and full of holes- I mean where is the discipline? Is the Israeli army this badly run? Even in American military comedies like STRIPES there is always a sense of discipline somewhere just off screen- here there is none- this seems more like this was supposed to be big business comedy and they simply dressed them in fatigues to be different. Gun shots are fired and no one blinks when seconds before a tryst was interrupted by people nearby. Who has a computer system with no back up?

Logic and reason play no part in this film.

Yes, I laughed. Yes, I was horrified by some of what happened- mostly I wondered how this film was allowed to go all over the place. I ask that as a serious question because the film ends saying that the film came through the Sundance Institute and other filmmaking academies. I can't imagine that anyone would allow a film to bounce around this much.

What a miss of a film.

Even with a belly laugh or two I can't in good conscious recommend you pay to see this when there are other better films at Tribeca.
Posted by Steve Kopian at April 27, 2014