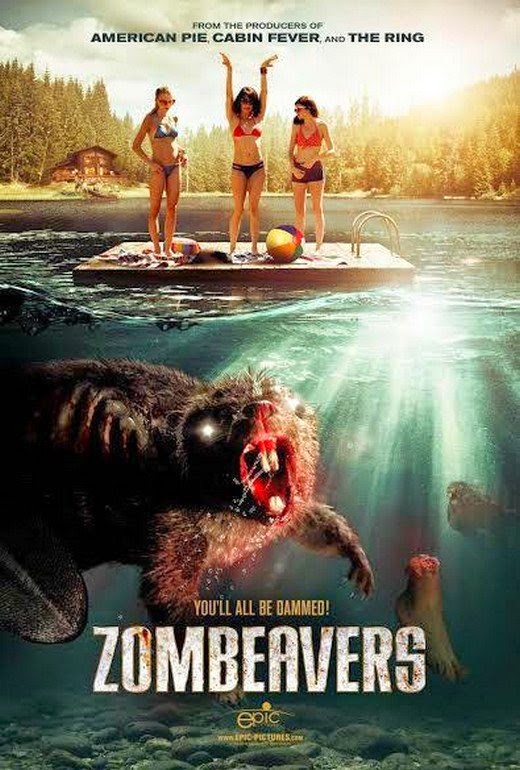 Not to put too fine a point on it but Zombeavers is one of the best films I saw at Tribeca. Its a film that truly knows what it is, and makes the most of it. Its a film that is gloriously without pretensions.  Its gory, and funny and tasteless, it has beautiful women half dressed and studly guys. It has something for everyone- assuming you like clever horror send ups.

The plot of the film has three girls heading to a lake house to help one of their number get over a broken heart. It seems that one of their boyfriends was caught via a Facebook picture getting intimate with another woman. Exactly who that is isn't clear from the photo. Eventually the boyfriends show up, as do a whole huge horde of undead beavers looking for a meal.

I'm guessing a good number of people were wondering what the hell this was doing at Tribeca. I mean even though this is playing in the Midnight section this is a bit sillier than the section usually programs. Actually this would seem to be more like a SYFY original than something that would play at something as prestigious as Tribeca. On the other hand until I saw the whole film I would have thought the same thing.

The best way to describe the film is to take a look at the trailer and realize that whats in the trailer is whats in the film , except that its funnier, gorier and way more intelligent. This is a film that seems to know exactly what the cliches and conventions are for this type of film and then it both plays with them and against them so that even while you're laughing at whats happening, you start to get uneasy because the rules it seemed to be following get tossed out the window. For example who lives and dies does not follow the unwritten rules of when and how characters are to bite it.

The effects are knowingly cheezy. Its clear the filmmakers knew they couldn't afford to give the film the best effects so they used the cheapness to the films advantage. For you to like the film you have to know that the film is ultimately a joke or a goof on some level and if you accept that then the rest of the film falls marvelously into place. The puppets and radio controlled beavers that populate the film suddenly become acceptable and in their own way down right scary.

Sitting in the press screening at Tribeca was one of the more cool events of the festival. Almost everyone seemed to have come from other bigger, more serious movies that more than kind of sucked. Raving about the lousy movies they simply wanted to see something good. Some were there just because it was playing and they had time. On the other hand some of us were there because we knew damn well what we were seeing and we were hoping for some goofy gore. Then the film started and we were in the truck with the two guys who would spark the whole thing and suddenly the theater was filled with laughter. Then the gore started and soon groans of "gross" echoed around the theater. Pay dirt and lots of fun.

For me the film was just fun. It was even more fun when I realized that it was a kind of palate cleanse and antidote to every other film in the festival, every one of which was taking itself way too seriously.

The movie ended and I started texting people.

Something you may want to be aware of- the film itself is really short- its about 70 minutes. I'm not complaining since it's perfectly timed. The remaining 15 minutes of the official running time is made up of some screamingly funny out takes (which lead me to believe much of this may have been ad-libbed), the end credits with a song about zombie beavers sung over them, and a last minute stinger.

Even though its short you do want to see this because in the right frame of mind this film is a blast.
Posted by Steve Kopian at April 30, 2014