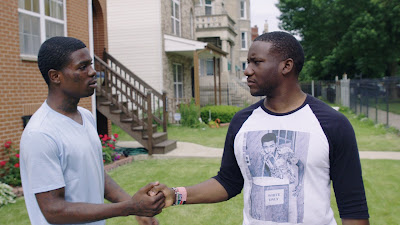 I pray to god that at some point I never have to see another film about gun violence in America and in the inner cities in particular. Its that we shouldn't be making these types of films, rather we shouldn't have to make these types of films. Simply put, we need to stop the killing. Until the killing stops perhaps we can have films like ALL THESE SONS coming out to help show us that there may be a way out of the darkness.

ALL THESE SONS is about two programs in Chicago, the MAAFA REDEMPTION PROJECT and The Inner City Muslim Action Network (IMAN) which are trying to help give people a second chance and change the mental view of the world that leads to violence. The film also follows several young men in the program as well as giving us insight into the people running the programs.

I have seen too many similar films over the last few years. The violence is getting so bad in some places that filmmakers feel they have to keep making films so that someone, anyone will do something and stop the madness. The films raise awareness to some degree but ultimately get lost in the screams of all the other films. Even I turn off after a while.

And then a film like ALL THESE SONS comes along and I feel just a bit hopeful. While covering similar territory as other films, ALL THESE SONS scores over them in any number of ways. The first is tat while the film is never not serious and never not urgent, it doesn't come in with a bludgeon and bash you with the seriousness of it all. The film has a sense of life as lived to it that most other films don't have. All you need do is watch the sequences were the directors are on the street hanging out and filming their subjects. There is a sense of people just being. Yes they know the camera is there but at the same time they don't care and they are just being. As a result we see the connections of everyone. We also get a real sense of life beyond the constructed narrative of the documentary.

The other big plus are the programs we are seeing covered. We see beyond just a meeting or a carefully chosen moment what they are about and who the people running them are. There is a real sense of people from the community trying to fix the community.  Watching them work I realized that this was the first time I have ever hada sense that these programs could actually change the world.

I truly loved this film.- I loved it so much that three weeks on and after dozens of other films in between I am still recommending and discussing it.

ALL THESE SONS is one of the best films at Tribeca 2021 and is highly recommended.