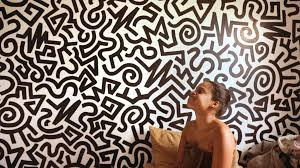 Stuck inside for 83 days during the covid pandemic a young woman tries to decide if she wants to meet the guy she's been dating online in person or not.

How you react to this film will depend upon how many of the self produced films abut the pandemic or not. It will also depend upon how you feel about a film largely told via Zoom calls and face time. If you are okay with both of those factors you will have a good time with AS OF YET. On the other hand if you are like me then you are going to be less receptive.

The problem for me with the covid  films is that I've seen too many god damn variations on this theme. I've seen a few I've reviewed and a hell of a lot more that I have not. Everyone it seems has a variation on the locked away in in my apartment  story pondering if I interact with the world. If you want to know why Hollywood ends up making variations of the same  movie all at the same time, consider that several hundred people locked away in their homes made the same film and sent them out into the world.

I'm not saying that all of the covid produced films are bad, they aren't. There are some good ones out there, say Danielle Solzman's PANDEMIC THERAPY, and many more are good if you haven't waded into the pandemic clump of films. All I'm just saying is that there simply have been too many of these things without any real variation for any rational soul to take in.

The other problem, one that way  too many no covid films are suffering from, and that is the over use of the Zoom or facetime means of shooting a film. Yes I understand why people are doing it in these covid times, but there is more to the world than just the computer or cellphone camera. I say this because there is a move by many young filmmakers to shoot their film as if its a series of calls. The trouble is that everyone is doing it and it's not clever any more.

I've gotten into arguments with people who think it reflects todays world, but my argument is that you don't facetime every conversation or every moment of your life. As I pointed out to people who say this is the way people interact that cinematically it's inert. It's worse that showing two people talking on a land line phone because with the the landline you would have camera set ups  to give the illusion of motion or life beyond the cord.

Even if I accept the face time set up as a conceit for AS OF YET, the film crashes and burns cinematically in the final scenes when for no valid reason that I can think of the film uses a stationary camera for the sequence that is NOT facetime.

WHY? Cinematically it makes no sense. I've seen it in other films and it didn't work there either.

This film frustrates me to no end.