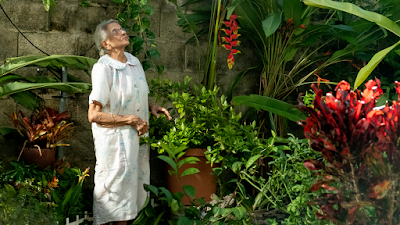 You need to see this utterly charming film. This winning little film is one of the hidden treasures of this year's Tribeca.

The film follows a senior citizen named Isabel who gets involved in planning the funerals of friends and relatives. How she interacts everyone makes for a film that is just good time with great people.

PERFUME DE GARDENIAS is one of the Tribeca films that I watch because it is laying at Tribeca. Every year I watch literally dozens of films I know noting about simply because the film is playing at Tribeca. I do this because with press access I can see them without any sort of expectations. Some times it doesn't work and some times, like wit this film it gives me a small gem I can recommend.

I love this film just because the people in it are so much fun. Chief among them is Luz Maria Rondon as Isabel. She is just a giant ball of love. She reminds me of my grandmother and wen the film was over I just wanted to go up and give her a hug.

What a wonderful film.

I know that isn't the deepest review, but with a film like this its enough.