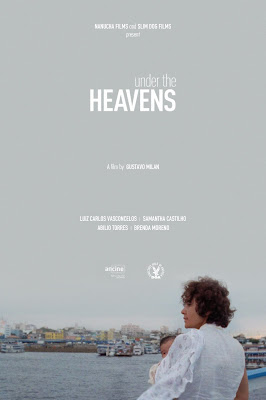 A woman from Venezuela  is traveling to San Paolo in the hopes she can find work. Along the way they meet a couple who have a young infant. Because she can beast feed the child for them she is  drawn into their orbit.

This film is damn near perfect. A moving story is told by a great cast. Its a beautifully made film that has a real kick. I absolutely loved this film.

The thing about the film is, that as perfect as the film is in its present form, I would really love to see this expanded. I want to see what happens next. Director Gustavo Milan has made a small masterpiece that has me jonesing not only fot more of this story but also for what ever he does next. This is great filmmaking.(Note: Milan said that he would like to expand it but budgetary considerations required him to make it as a short)

UNDER THE HEAVENS plays June 13th at 3 PM at  the Brooklyn Film Festival. For more information go here/