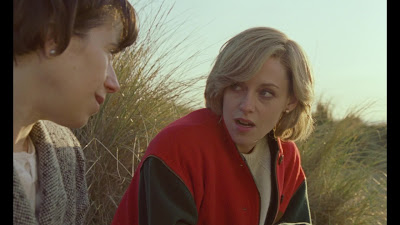 SPENCER is the story of a fateful Christmas in the life of Princess Diana. Her marriage is crumbling and she clearly wants little to do with the royal family. What is she going to do.

The magnificent performance by Kristen Stewart SPENCER is rightly being touted for an Oscar. I have a hard time wrapping my head around what I’m seeing on screen and all of the other roles she’s played. More to the point I’m having a hard time sorting out how that was the same woman I met fleetingly several years ago. It doesn’t add up because she is so deep in the role as to have lost any sense of herself.

Now while I liked the film I’m a bit confused with any Oscar talk beyond Stewart’s performance.

While the film looks great, there isn’t much beyond that. This is a film about a lost girl  in an empty existence that is pretty empty. It’s not that nothing happens, it does, rather thematically and emotionally the film kind of stops growing after 15 minutes. We see the insanity of royal existence, and we see the emptiness of it. And then Diana crashes around the empty halls for another hour and a half coming to a few final scenes of Diana and her kids that are a bit too little too late.

Watching the film I kept waiting for it to say something new but it never did.

Honestly this like watching a well produced but stuffy episode of Masterpiece Theater.

While it’s not a bad film, outside of Stewart’s career redifining performance, it’s really empty