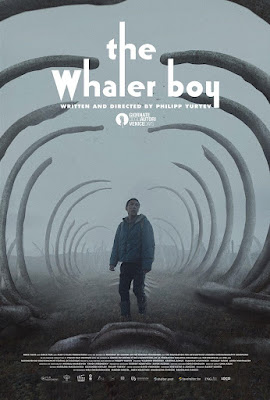 Living on the wrong side of the Bering Straight a 15 year old boy can only dream of the world outside. When the  internet opens his eyes to girls, or specifically cam girls his world ends up turned upside down when he runs off to find the girl of his dreams.
One of the few times in my life I ever blindly went in to a film based solely on the image on a poster, The Whaler Boy was not what I expected. Then again having zero idea what the film was only the image in the poster above I suspect nothing was going to live up to the film that I had made up to go with it.
The film as it is an intriguing tale of the young boy growing up in the modern age. Its the story of people who don't know the mechanized world suddenly being forced to deal with it. Sure they can see all these wondrous things and talk to live girls but what does it all mean? The film walks the fine line between comedy and drama as we both laugh and cringe at some of what happens because we "know" the world while at the same time we are sucked into the very human story of someone trying to find their place in the world.
I was enraptured.
I love that director Philipp Yuryey loves his characters. I love that he isn't trying to be better than the characters but instead uses them to reveal to us a very modern very real  version of young man coming of age, both in the sense of being a man and a human but also in the sense of a place in the world. By the time the film is done the world for our hero is irrevocably changed forever, just as he himself is.
This is sweet little film that you really should search out because it is not only a tale you probably haven't seen before but its also a damn fine film.
Posted by Steve Kopian at January 12, 2022