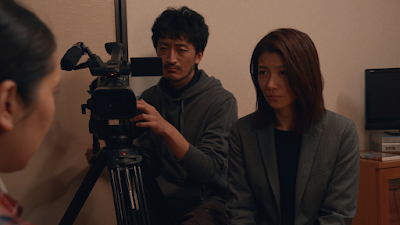 A news documentary filmaker is investigating a tragic scandal at a school that resulted when the relationship between a teacher and student came to light. Her life beomes complicated when she discovers a secret about her father.

Solid, if a bit over long, examination of the notions of right and wrong in real life and in the media. The film makes a very clear case that what we see in the news is carefully crafted. They are telling a story in order to get ratings and sell their product and as such they paint everyone as purely black or white. In the mean time it also makes it very clear that life isn't like that and what reality is all shades of grey.

This is really good film. Stuctured in such a way as to play out as a kind of thriller we are held in our seats by a desire to find out how this is all going to end up. It's helped along by the fact that we know nothing is simple and we can't rely on know what is black or white. It also helps that this is based on an actual case. so there is a good chance it's going to be messy.

Beautifully acted and wonderfully shot. A BALANCE is recommended