The Glorious ITS A SUMMER FILM plays NYICFF this weekend 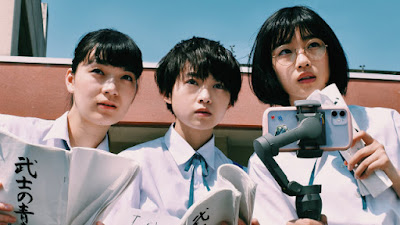 With IT's A SMMER MOVIE playing NYICFF this weekend I'm re running my review from the multiple festivals it played in 2021.

IT'S A SUMMER FILM is a lovely love letter to the movies. The story of three film loving friends who decide to make a movie.

Mixing genes and twisting into unexpected places this is on of the best surprises of the year. I was not expecting to fall so head over heels for this film. To be honest I wasn't planning on seeing it for either Fantasia or Japan Cuts but the fact both festivals programmed it made me curious.

This film is a delight. It works on so many different levels, from the straight forward one that will make anyone who walks into it fall in love with it, to the one that is full of cinematic references to Japanese cinema and culture that will make you smile knowingly at everything that happens.  I was so wrapped up in the film that I was talking at the screen with a running commentary about the cool way that director Soushi Matsumoto was blending all the ingredients together.

If you love the movies this is a must see. Its also a must if you jut want to see a great film that will make you smile from ear to ear. Trust me- this is going to be a film you watch over and over again for yeats to come.