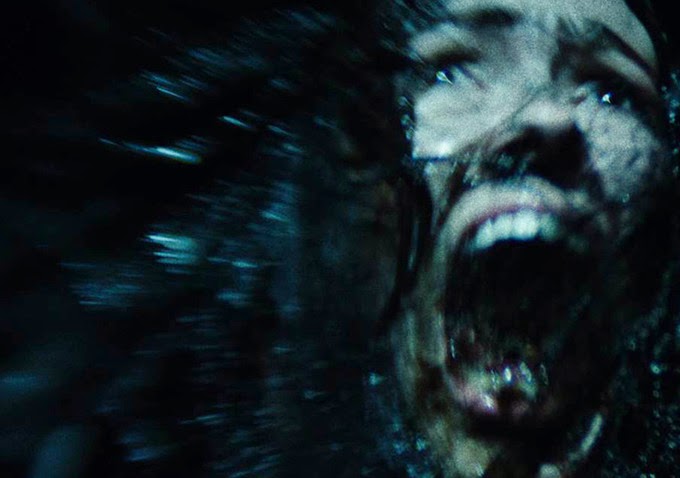 If you've been reading Unseen for any amount of time you know that I'm a fan of the Vicious Brothers. Their Grave Encounters is one of the best horror films of the last 20 years. Its the first film I ever saw as a member of the press official at Tribeca. I've interviewed them and did several pieces on their follow up to Grave Encounters,  called in no duh fashion Grave Encounters 2. I love what they do with horror, they are masters of visceral scares...

...on the other hand they can't do comedy. They really can't. The humor that opens Grave Encounters 2 wrecks the film and the humor in their latest film Extraterrestrial almost completely sinks the film.

The plot of the film has a couple going with friends up to a family cabin in order to take pictures so it can be sold. While they are having fun, and the couple slides onto the edge of breaking up they see a fireball crash in the woods nearby. Going off to investigate they find a crashed flying saucer and soon are under siege by nasty grey aliens.

Before I get to the problems with the film, I have to say that how you react to this film will depend upon whether you get the references to science fiction horror films from the 80's and 90's. This film is full of riffs and references beginning with an opening title sequence which kind of apes the X-Files. If you don't get some of the reference the film may seem really dumb...

...and it is dumb at times with the couple's friends being loud rude and crude. They aren't so much people but overblown frat boys and sorority sisters who just want to get drunk and stoned. Yea I know many people are like that but few are as so obnoxious about as this group are. And even if you were a drunk frat boy you wouldn't want to see a film about these losers. The jokes that accompany their shenanigans are just not funny. The jokes are low brow and juvenile, which would be fine except that the level of the drama and the horror is diametrically opposed  to it.

On the other hand the horror elements in the film are amazing. The fear we have waiting to see what happens with the greys is physical. You will squirm in your seat during several sequences in the film. There is something truly terrifying as the greys' use their abilities to do nasty things even from a distance (The cop car sequence for example). The Vicious Brothers also have this ability to create sequences that make no logical sense but wreck you inside. Here a late in the game look in a space ship is truly creepy -and obviously riffing on the Travis Walton film Fire in the Sky.  (If you want a prime example of the humor wrecking the mood two words anal probe)

To be honest this review has been kicking around since the start of the festival when I saw the film. When I first saw the film I was full of piss and vinegar wanting to rant and rave about it in great detail, but as the rest of the fest over took me and the film the desire to really do a proper write up has faded.  The film just isn't worth the effort- though I would say give the film a try on Netflix.

On the other hand my desire to smack the Bothers Vicious is still there. Its been fueled by several conversations with horror fans outside of the festival who, like me, bemoan the humor in the second Grave Encounters film. They like, me want to know what they were thinking. When I mentioned that there is humor in this film of a similar nature, though better integrated, their desire waned even as I told them of the strong horror element.

My question is why such masters of horror would use such low humor? And when I say that I suggest they could one day be considered some of the greatest ever working in the genre. Unfortunately their inability to blend the scare with the jokes are going to keep them from attaining the acclaim they deserve. They have to lose the jokes and just go for scares since its clear from Extraterrestrial, when they go for screams there may be no one better working today in the horror field.
Posted by Steve Kopian at April 30, 2014