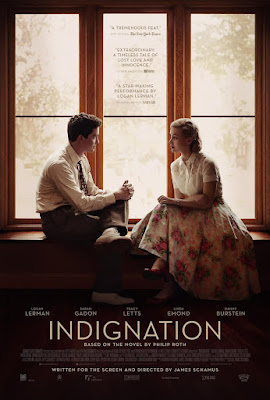 I loved this film! When I first found out about this film, I was excited to see that it starred Logan Lerman, because I loved him in Perks of Being a Wallflower.

The film takes place in 1951, during the time of the Korean War. The movie starts in Korea during the war where a young man is shot to death. The next scene, we’re in New Jersey at the funeral for the boy who was shot in the war & we find out that there already have been several funerals in the community for boys killed during the war. Marcus (Logan Lerman) chooses to go to college in Ohio. If one goes to college, then they don’t have to go into the draft.

Marcus works for his father in his father’s kosher butcher shop. Both his parents are the stereotypical neurotic Jewish parents. His father is terrified of him getting killed somehow, because many of his peers have been killed. He’s worried he’ll fall into the wrong crowd. He doesn’t trust him when he says he’s going to the movies with his friends, and so both his parents are pretty terrified about him going to school in another state. Marcus can’t wait to leave.

I don’t want to give too much away, because of how much I enjoyed this movie. The film does have some funny moments, but overall, the movie is very sad and not one that has one of those happy Hollywood endings. I highly recommend it. 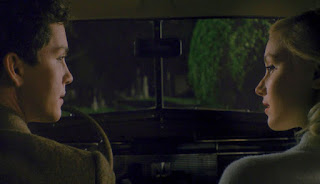