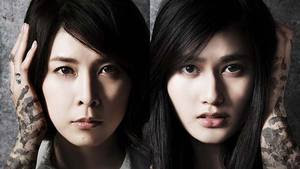 Yoshihiro Nakamura‘s THE INERASABLE scared the crap out of me. This low key film of suggested horror had me up way too late and sleeping with the windows closed and the AC on so I wouldn’t hear the wind outside. I haven’t been this disturbed since I saw Brian DePalma’s CARRIE, though THE INERASABLE‘s terrors come not from a scare but a carefully created feeling of dread that there are vengeful ghosts in the shadows.

The plot of the film has an unnamed writer who uses writer suggestions of real life events in her stories getting a letter from a woman who just moved into an apartment block. An exchange of emails occurs and the writer seen realizes that she had received other letters about the goings on in the building. This send the writer and her new found friend on a search for the source through the history of the building and the land.

More a story of suggestion then graphic horror, there is no blood, no gore, no jump scares, this film is going to drive those who want the blood and the ghosts front and center crazy. Designed as a puzzle box trap that pulls the characters and the audience deeper and deeper into the darkness this is a film of stories. Everyone is telling us what happened before, as the ghosts we know are found to have ones influencing them from before.

Beautifully crafted, this is a film builds a wonderful toxic atmosphere. We are told stories with some facts and fill in the details for the rest. Yes we do see some ghosts, but more often than not it’s a sound or an image in a flashback or story that makes out skin crawl. The film is so adept at creating tension that when I heard a voice at one point a shivered violently and the hair stood up on the back of my neck.

I know that the film will split audiences. I know the regular horror crowd who want shocks that will cause them to scream and then dismiss them are going to be disappointed. This is something else. This is a terror built on the stories we tell each other. These are the sort of tales that we tell about the supposed haunted house down the street or what happened in the aftermath of a tragedy. Ghosts walk and restless spirits want payback.

This maybe one of the finest ghost stories ever made. It certainly is one of the scariest films I’ve ever seen.

Thank you Fantasia for bringing this film to North America. Films like this are the reason you are one of my favorite festivals in the world.
Posted by Steve Kopian at July 23, 2016