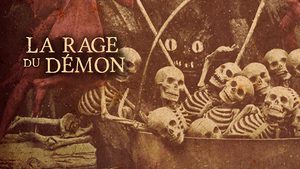 The premise of the film is that a supposedly lost film, that may have been made by Georges Melies turned up and was screened by a noted film historian in 2012. The screening was a big to do at a Paris museum that ended with a riot and the police being called. The film then tracks the history of the film and its supposedly cursed history.

Playing like a typical TV documentary LA RAGE is a brilliant mix of film clips and talking heads that manage to blend the horror story with history in such a way that unless you really know your cinema history odds are you’d be willing to buy into the film completely. Watching the film they had me completely believing what they were saying until a reference to something in New York made it obvious it was all made up. I knew it was a mockumentary going in but it’s so perfectly done they really do sell it.

This film is an absolute delight. Not only is it a neat little horror film but it’s also a glorious tribute to Georges Melies and the early days of movie making when they were seen by many people as magic.

One of my favorites of this year’s Fantasia and highly recommended
Posted by Steve Kopian at July 19, 2016