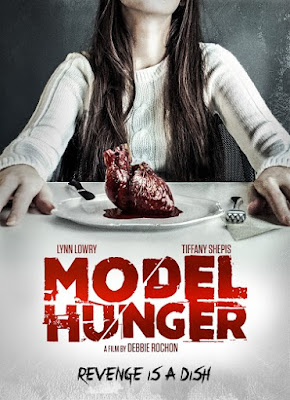 The film has the young beautiful girls disappearing in and around a small town. No one seems to know why. Why a young couple moves in the realize that weird things are going on next door, and that their neighbor a one time model who left the business because she had the wrong body type, maybe behind it all.

This uneasy mix of horror and comedy,doesn't completely work thanks to an uneven tone. It also isn't helped by the ultra low budget which hurts the feel of the film.  And like many films of the late 60's and early 60's the film can't overcome a cast which is five to ten years older than the students they are playing.

I'm not going to say any more about the cast or the budget since had the script been better or Rochon's hand been steadier this would have been a good film instead of a just okay one. The problem here is the script waivers between knowing comedy and full on horror and the two never blend. Are we laughing at or with the film? I'm not sure. For example the film has girls going from door to door to collect money in a series of encounters that are played much too broadly and its not clear if we're laughing because its funny or because it's bad.

If the film never finds it's sweet spot don't blame Lynn Lowry who gives a solidly unhinged performance as the model gone psycho. The flaw is again the script which weakly mixes the Lowry sequences which come off more as psychotic character studies and the rest of the film which is a kind of by the numbers horror film. The two halves don't really work and the film is the less of it's parts.

And despite my real reservations this isn't a wholly bad film. The film works as a solid almost no budget horror film that would be great on a Saturday night with a bunch of friends  with some beers and snacks when you can't find anything else. For the most part MODEL HUNGER is a hell of a lot better than most of the horror films I see every year that I never review.
Posted by Steve Kopian at July 11, 2016