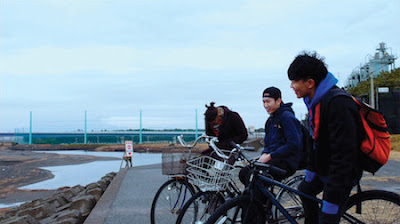 A ROAD is a documentary/dramatic hybrid put together by Daichi Sugimoto. Playing a character that is essentially himself he ponders life and what he should do as he crashes into the college years. He then tries to capture the wonder he felt when he was younger.

I'm not going to do a review of the film. Its low tech mash up of drama and documentary (you have a sense that some of this is just conversations he had filmed) will either thrill you or drive you mad. Ten minutes in I knew this film wasn't going to work for me and while I hung around to the end I knew that there was no way that I could in good conscious review the film. I debated whether to even mention I saw the film, but in fairness, and because of the way I'm wired, I'm telling you what it is and leaving you to parse out if you ant to see it.

At Japan Cuts A ROAD will preceded by a short film called BORN WITH IT.  The film is about a dark skinned Japanese kid who experiences prejudice when he moves to a rural village with his mom. It's an okay film that feels very much like the student film that it is.

For tickets and more information go here
Posted by Steve Kopian at July 13, 2016