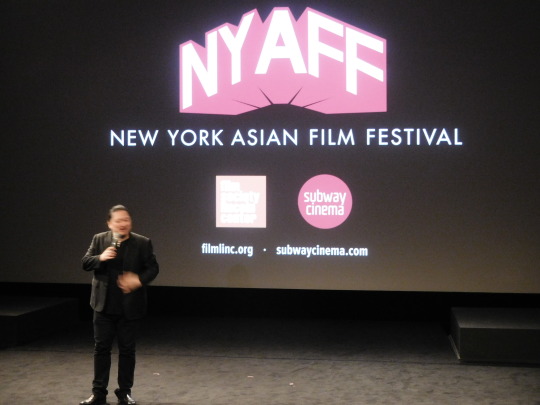 I had a great time at the New York Asian Film Festival this year. It was a great fun.

As much as I would love to do a wrap up I’ve found that the quick jump to Japan Cuts and Fantasia has eaten my brain and I’m already onto the next thing. I am hoping to get a full review of TENANTS DOWNSTAIRS together before weeks end- but that may end up stalled.

The Best Films of 2016
SEOUL STATION- aa rebirth of he scary zombie film
LAUNDRY MAN- great blending of genres
IF CATS DISAPPEARED FROM THE EARTH was not something I saw but every Unseen connected person who did loved it
FOURTH PLACE- one of the best drams of the year from anywhere. No one I know who saw it wasn’t blown away. Its way better than you think.
MY BODYGUARD-Sammo’s violent heartbreaker.
KIYAMACHI DAUMA- button pushing heartbreaker is the sort of film NYAFF needs to schedule more of. Not for pretty much anyone- for a select few its breath of fresh air
KEEPER OF DARKNESS- wonderful supernatural popcorn film. Who need Ghostbusters when we have Fatt?
TENANTS DOWNSTAIRS- button pushing film full of sex, violence and depravity. What a blast.

Hands down the worst film of the festival and one of the worst of the year was THE TAG-ALONG. This horror disaster makes no sense what so ever as it changes the rules of its world not just from scene to scene but moment to moment. Its literally making it up as it goes along so it never generates interest much less scares

And with that I'm largely done with the festival. A full review of TENANTS DOWN STAIRS is coming and I have to post some pictures- I have to do something with all of the ones I took. Beyond that its time to chill out and get ready for next year.
Posted by Steve Kopian at July 13, 2016

Email ThisBlogThis!Share to TwitterShare to FacebookShare to Pinterest
Labels: nyaff 2016