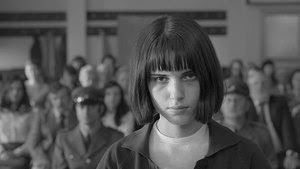 I am a loner. A destroyed woman. A woman destroyed by people... I have a choice - to kill myself or to kill others. I choose TO AVENGE MY HATERS. It would be too easy to leave this world as an unknown suicide victim. Society is too indifferent, rightly so. My verdict is: I, Olga Hepnarová, the victim of your bestiality, sentence you to death.

True story of Olga Hepnarova who drove a truck into a crowd of people in 1973 killing 8. She ended up being the last woman person executed in Czechoslovakia. Stark black and white film shows us the story of a young woman neglected by her parents and bullied by society who reacted in a violent way to force society to take a look at the way it views the down trodden.

Or that's what it seems to be trying to say. The trouble for me is that Hepnarova is clearly not all there. The film begins with her first suicide attempt and goes on to show us in the psychiatric hospital and her life after that. She is already an individual who is standing slightly apart from the rest of the world and her interactions with the world show us a person who has trouble fitting in. She is challenging the world as much as she is being victimized by it. She is not quite the victim of the world that film would make us believe she is. This isn't to say she deserved hat happened at any point  only to point out she had issues that made connecting difficult and its understandable why some people struck back at here.

I think the problem is that writer/directors Petr Kazda and Tomas Weinreb have framed the film action more to make a point rather than give us a fair idea of anything. Everyone Olga encounters is cold to her and her presence is always framed to make her the outsider.  One can see the hands of the directors at work. It never feels real and is more theatrical art than a film because its so clearly manipulating things for effect and to make a point rather than show what happened.

I like this film to some degree but I find it is something I admire more in the craft of the making than in the viewing.

The film screens again at Fantasia on the 25th. For tickets and more information go here.
Posted by Steve Kopian at July 22, 2016