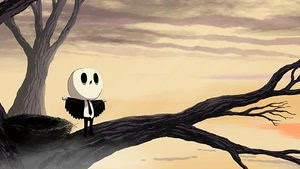 PSYCHONAUTS: THE FORGOTTEN CHILDREN is not for kids. I say this at the outset not to scare people away, rather to warn parents who see the animals who make up the cast and think this is going to be something for their little ones, no it’s not. The not for kids moniker is made clear when we see an atomic explosion in the opening minutes and watch the cute animals be destroyed by the blast.

A disturbing, deeply troubling, and quite brilliant look at the pain and suffering of growing up PSYCHONAUTS tells the story of a bunch of humans in animal form who are trying to just get by. The island was once devastated by an atomic explosion which decimated society. The survivors rebuilt things and go on. The film primarily focuses on Birdboy, a dark drug addicted figure trying to sort out his inner demons and his legacy as the son of a notorious drug dealer who was hunted down. The film also focuses on Dinky, a mouse who believes in Birdboy’s greatness and tries to help him as best she can even to the extent of giving him happy pills. This is the life and times of these kids and in a way about ourselves as well. It’s the story of how we slip into our own head spaces in order to survive the cruelties of the world.

I have no idea what to say. This film is like having someone step on your throat. It’s a punch in a gut and in a weird way one of the most truthful examinations of growing up I’ve seen. This is a not a remotely nostalgic look at the characters but a warts and all one. The fact we are seeing cute animals going through these twists and turns makes the emotions deeper.

Strangely despite being almost bleak beyond words at time the film is somehow hopeful. For all the pain suffering and death there is hope in the end. I would almost dismiss the ending had the film not woven references to it all through the story.

Based on an award winning and Oscar nominated short and a graphic novel this film is one of the best animated films I’ve seen this year. It’s the cinematic equivalent to a graphic novel with level and textures way beyond most films, never mind animated films. Let’s face it you would never ever see a film this dark, complex or emotional from an American film studio.

This is a must see for anyone wanting tio see a truly great film. One of the best films at this year’s Fantasia and one the best animated films you're likely to ever run across.