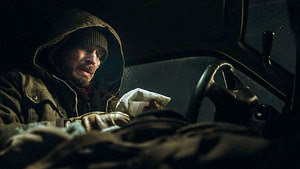 Solid crime/fantasy/noir has a barely making it mill worker Bob Langmore being called by his ex-wife to look in on their troubled daughter. Moving from the country back home he ends up taking a job working for the local crime lord, however things go from bad to worse when his daughter goes missing and Langmore thinks it maybe because his daughter may have the same disease he does, one that is turning him slowly invisible.

More character study than straight on crime drama THE UNSEEN  is full of great characters and, invisibility aside, true to life feeling to its actions. This is a film that really is about the characters, with everyone from to bottom giving top drawer performances.

I like this film a great deal. It was a wonderful surprise.  This is going to be one of those films down the road that I hand off to people and say don't read on it just watch it. I say that because once you toss in the invisibility thing people kind of take a step back. They shouldn't, nor should you because this is a film that takes something you think is going to ruin the film and makes it something infinitely better. Writer/director Geoff Redknap needs to be commended and then some for making the run of the mill something special.

If I maybe allowed one word of warning, the pace of the film for the first half hour is kind of slow. Stick with it. Redknap is building mood and character and it pays off on the back end when everything is finally moving.