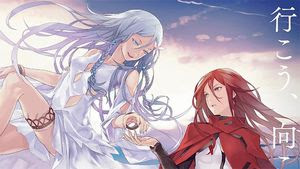 The World Health Organization's Helix inspectors watch over the worlds conflicts. They decide who receives aid and who doesn't.  A backdoor deal with one of the sides in the conflict she is watching over results in her being sent home she arrives just in time to be faced with a rash of suicides. Could the wave have something with a childhood friend long thought dead?

Based upon the work of Project Itoh (Satoshi Ito) HARMONY is one of three films recently produced bringing the writer's small body of work to the big screen. This is film full of heady ideas that stretch far and above the typical science fiction or even anime film. Chief among the ideas floating around are the film's questioning of the so called nanny state which watches over everyone. In this future world everyone is fitted with a device called Watch Me which activates upon adulthood and monitors everyone's health and literal place in the world. Do we have free will any more and ill we have it it the future or will we hand it over to the government in order to be safe? From an intellectual stand point this film has a lot on it's mind and is to be applauded.

From an execution stand point I'm not so sure the film really works. Filled with long flashbacks, meaningful silences filled by choral music and some over ripe dialog that make damn sure you know the film is about something this film is a long haul. I kept wanting to hit the fast forward button so that I could get to the next thing. As I said give the film points for being about something but take them away for making it a slow slog to piece it all together.

To be honest I've read that the problem with adapting Itoh's work is that the choice had to be made be 100% faithful and have a film like this or chop out the ideas and have a slam bang action film. I have not read any of Itoh's work, nor do I think most critics who have mentioned his books, so I can't say it's true, however I can't believe that their wasn't a middle ground somewhere.

I will admit part of my problem with the film is the graphic design which aligns closely to typical anime styles. While I find nothing wrong with the style, I love anime, the use of the style kind of works counter to the story. Here is a unique heady subject and it should look different rather than exactly like every other anime.

Recommended for the heady ideas but not its execution.
Posted by Steve Kopian at July 21, 2016