In brief:Mother, I've Pretty Much Forgotten Your Face 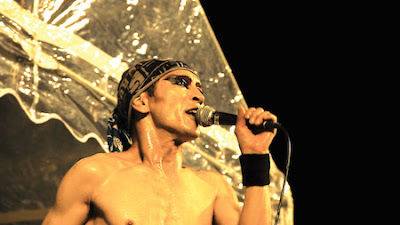 Every July  Japan Cuts usually runs one film full of music that knocks my socks off and becomes a favorite. This year  its MOTHER,I'VE PRETTY MUCH FORGOTTEN YOUR FACE.

I loved it so much that when it was done I sat down to write about it and found that all I could say was that was great, let me see it again. That's not a proper review but it kind of explains where the head space is- "the this is really special let me experience it again".

The film is a  portrait of musician Michiro Endo on the eve of his 60th birthday. Endo was and is one of the major movers and shakers in the Japanese punk scene. He eventually left several influencial groups and started touring on his own As he tours the country in the spring of 2011 the Fukishima native learns of the devastation of 311. This sets him reflecting about life , his home and his mother.

A fantastic mix of talking heads, conversation and music (the film has lots of great music) we get to know the man and his music. This is the sort of a film where I went in knowing almost nothing but came out wanting to know more. This is one of those films where you get the feeling that you've discovered a new favorite artist.

One of my must sees of Japan Cuts.

For tickets and more information go here
Posted by Steve Kopian at July 17, 2016