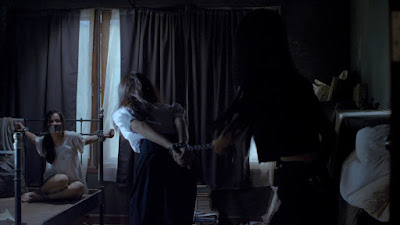 Grace is former Internet idol who has fallen in disfavor. Using her number one fan as an accomplice she kidnaps current idols and tortures them to death.

On the other hand the film has two things going for it. First the film strives to be more than a slasher film by giving us commentary on the Internet linked world we live in. You know the one where people become celebrities for doing absolutely nothing. Hit the web at the right moment and you shoot to the top. GRACE shows that world very clearly where pretty girls become famous for looking good in costumes. It also shows us the insanity of peoples reactions to these non-celebrities by showing us the all too frightening fans and comments left by them. While there isn't a great deal of this, there is enough to make me feel that the whole film isn't gratuitous.

The other thing the film has is Apinya Sakuljaroensuk in a star making performance as Grace. Say what you will about the rest of the film for good or bad, its hard not to watch Grace and have your heartbreak as she scares the shit out of you. Sakuljaroensuk's performance is the sort of thing that lifts the film up from being just a crazed slasher film. Think of it as the difference between THE BURNING and FRIDAY THE 13TH, Jason was much more interesting than who ever was the killer in the BURNING. Watching Sakuljaroensuk makes the film almost worth recommending.

As good as Sakuljaroensuk is, I still can't really recommend this film. If you like slasher films by all means give it ago, but anyone else may want to skip this film and go home early.

For tickets and more information go here.
Posted by Steve Kopian at July 01, 2016